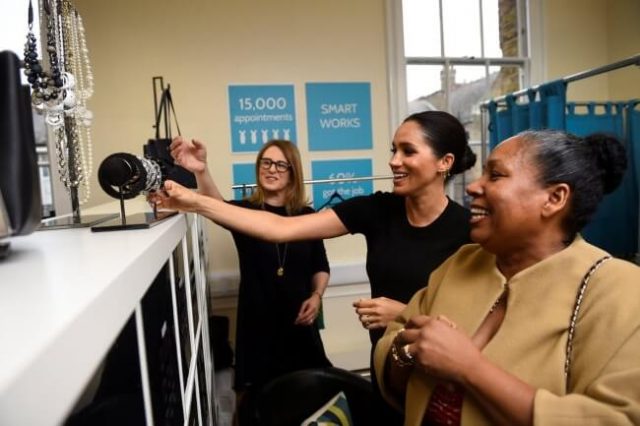 Megan Markle is more than just another starry-eyed royal with something to prove. The former Suits actress will soon be launching a very special fashion clothing line that has nothing to do with London pomp and glitz and everything with working-class women and a real sense of community. The Duchess of Sussex, despite not having revealed too much about the inns and outs of the proposed style of her new line, did offer to readers of popular magazine Vogue (the British edition) a glimpse into what they might expect to come from her partnership with Smart Works.

Smart Works is a helping-hand organisation focusing on empowering unemployed women by giving them a leg up back into the job market by ensuring that they able to dress for the occasion. Many women struggle to re-integrate with the general work force, especially after having been stuck at home for an extended period of time.  They hardly have everyday necessities like food and basic beauty and hygiene products at their disposal, let alone workplace-appropriate clothing.

Her decision to join forces with Smart Works, explains Markle in her guest-editorial in the September edition of Vogue, came from a place of the general moving away from the word “charity”, with the focus being on the concept of “community” instead. The Duchess referred to Smart Works as an organisation that “reframes” the entire idea by instead of focusing on the concept of the “hand-out”, instead putting itself out there as a community of women interested in empowering other women “in their professional pursuits”.

But where exactly then does a fashion line fit into the picture? The concept, explains royal commentator Omid Scobie, that of selling high-quality pieces of clothing on a one-on-one basis. What this means is that for every item sold, the exact same item will be donated to Smart Works. Markle elaborated on the one-on-one concept in the Vogue editorial and said that it not only served to empower women by making us part of each other’s stories, but it also reminded us that we “are in it together”.

But the Smart Works line isn’t Markle’s first brush with her own fashion line. In 2016 the Duchess designed a clothing line for Canadian clothing brand Reitmans. The idea at the time was to design a line that closely resembled the clothing worn by Markle’s character in the popular television series Suits.

Markle at the time told the story of how women often approached her to enquire about a specific item of clothing worn by her character in this episode or that. She remembered a specific incident of having had to reveal that a particular skirt was a Tom Ford creation and as such, cost a pretty $5,000 penny.

Markle’s comment at the time, “Who in the world is going to buy that?”