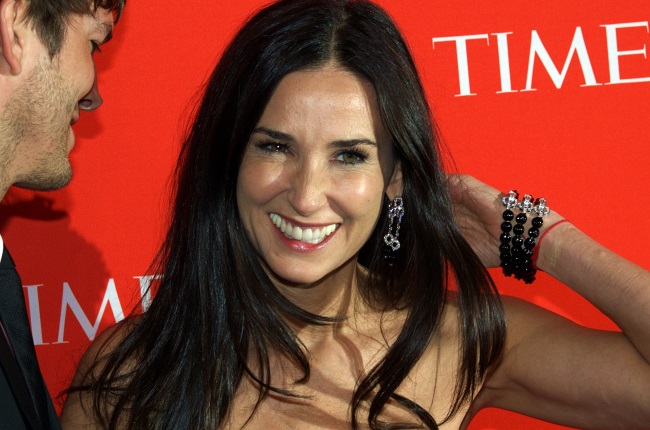 A never-before-seen side of long-time Hollywood actress Demi Moore recently popped up on Instagram – much to the hilarious amusement of her fans. Moore can be seen donning a fake moustache and a wiry thin-framed pair of copper spectacles as she jokingly introduces herself to her audience as if for the very first time. At a stage one of her daughters is overheard telling mom Demi to “look over, please”, whilst another jokingly pipes up referring to her mom being a “dancing monkey”.

It should at this stage (purely for entertainment and information’s sake) be mentioned that Demi and husband Bruce Willis’ have three children together, all of which are by now full-grown adults. This did not seem to deter the beloved actress from feeling obligated to provide the necessary entertainment to her in-isolation ex-husband and children, who are currently sheltering in place at their home in Sun Valley, Idaho.

It is however a very well-known fact that the actress enjoys a close bond with all three of her children. Rumer is now 31, Scout is 28 and the couple’s youngest daughter, Tallulah, is 26. All three daughters appeared in very high spirits thanks to their famous mother’s comedic antics.

What fans did not experience as very comedic is the fact that the Die Hard actor is staying put in the company of ex-wife Demi and his three adult daughters, instead of doing the same with new wife Emma Heming and the couple’s two young children, Mabel (8) and Evelyn (5). Family-insiders have been insisting that all is well in the land of Bruce-and-Emma, even despite his seemingly bizarre decision to remain behind closed doors with Demi-and-kids instead.

Emma, say those who claim to know exactly what’s up and what’s not, made the decision to remain behind without Bruce in home-city L.A., and for purely geographically practical purposes. Bruce and Demi are “great friends” after all, is the claim made by those who insist that nothing at all untoward is in the offing between Bruce and his ex-wife.

Scout To The Rescue?

But not everyone is easily fooled, as is evident from remarks by the hundreds of fans not quite completely sold on the idea of platonic love and happiness and “they share children, after all”. What many people find exceptionally unsettling is that whilst Bruce and Demi are posing together in matching striped pajamas of a rather hideous hue of green, Emma over in Las Vegas is posting stories about her skincare line. The celebrity-by-marriage has is apparently engaged in chain-smoker-style meetings about her upcoming launch-of-brand in the United States.

Scout Willis has in the meantime taken it upon herself to offer up a rather watered-down explanation in an attempt to appease those speculating about a possible shipwrecked marriage. She recently took to Instagram and told a rather far-fetched tale of how her younger sister, who according to Scout never did learn to not bugger around with hypodermic needles, had picked up a stray needle somewhere in a park and had accidentally poked herself in the foot.

According to Scout, her “stepmom” was then forced to stay behind in L.A. in order to receive the outcome of a test following the incident with the needle, instead of following the original plan, which involved everyone isolating together in Idaho.

Why did Bruce Willis And Demi Moore Separate?

Moore has on various occasions referred to Willis as having been controlling throughout the course of their marriage.

How old is Demi Moore?

Where is Bruce Willis originally from?

Willis was born in West Germany.

Is Bruce Willis his real name?

How long were Bruce and Demi married for?

They were married for 11 years.