How Toronto’s Raptor-Foot Came To Be 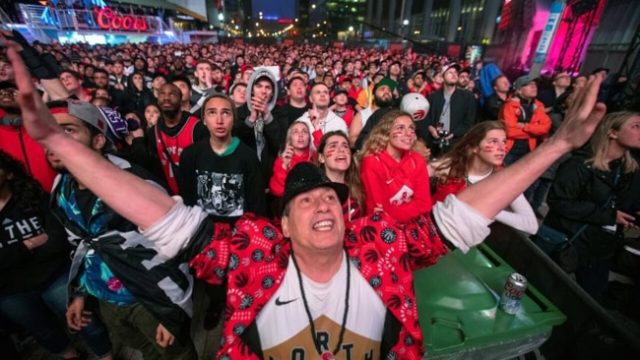 The reggae-infused movement referred to as Raptor-foot may have started in downtown Toronto, but its quickly sweeping through all of Canada. It’s all about basketball fever and it’s become the unofficial NBA anthem for a country crazy about the sport. The artist of the song that has now become the lucky beat for the Raptors, a man known by the stage name General Genius, is Bob Turner. Since having been composed by Turner, the anthem has been remixed and re-imagined on YouTube and eventually adopted by Raptors fans as their own special chant. Its infectious, its inspiring and it’s a nation’s own.

According to the man known affectionately as General Genius, he isn’t after fame or fortune. The best reward for Turner is a Raptors win. And that’s exactly where it all started it the first place.

It all came to pass during the second of the playoffs when the Raptors faced off with the Philadelphia 76ers. Turner recalls how he had been hoping feverishly that the Raptors would be able to play catch-up. Clenching his first and stomping his foot in a “Come on guys!” pose, Turner had rather unintentionally come up with the idea that eventually evolved into what is now widely recognized as Raptor-foot.

At the time of Turner’s foot-stomping performance he was spotted by CTV news reporter Sean Leathong. Impressed by Turner’s dinosaur-like lunge, Leathong decided to tweet the dance on Twitter, and the rest was Raptor history.

Leathong describes what has now become known as Raptor-foot as the right kind of earworm when talking social media presence. It’s a tune and rhythm that tends to get stuck in your head rather quickly, said Leathong. After hearing it only a couple times, one tends to find one’s self humming it over and over again.

The 17-second video clip on social media was all it took to catapult Raptor-foot to social media and eventually NBA-stardom.

Love the NBA? Why not bet on Basketball online NOW?