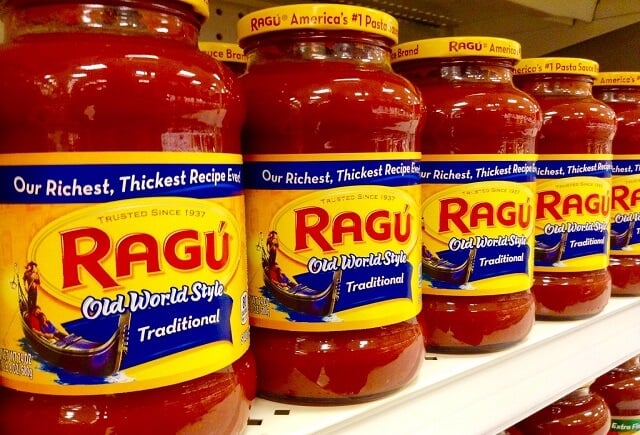 Broken supply chains and the subsequent unavailability of certain products are most likely the driving force behind foodstuffs giant Ragu’s decision to no longer distribute its pasta sauces north of the US border. And judging by the reactions of Canadians on Twitter, we’re a convenience-loving nation in mourning over the news of Ragu’s departure from our midst. Canada, it seems, has lost an icon of the pasta sauce industry.

Ragu parent company Mizkan America, Inc. may not have provided much in the way of an explanation for the company’s summer-departure from the Great White North, but a banner posted to the company’s website does warn of possible shortages of certain supplies becoming a potential threat to the company’s distribution power.

Which of course means that 2020 has managed to take even our favourite range of pasta sauces from us. Which Canadian kid will ever forget being served a hearty three-colour cheese tortellini acquired from Costco, with a healthy serving of original-style Ragu sauce on top? Cold Ragu straight from the beloved bottle, of course.

Some Call It A Blessing

But while some Canadians mourned the death of the trusted pantry accompaniment, some others yet welcomed the departure, describing Ragu’s leaving our shores as the perfect opportunity for locals to give products such as Classico, President’s Choice, and even No Name brand a fighting chance to win them over.

Others still, were quick to point out the many benefits of learning how to make own’s own tomato-and-herb pasta sauce at home, saying that Ragu’s leaving Canada is actually a blessing in disguise.

One particular Canadian Twitter user invited their fellow pasta lovers to give a combination of strained tomatoes, herbs, salt, olive oil, and peppercorns a try. This, said the made-at-home enthusiast, is a recipe for a pasta sauce that isn’t only more affordable than store-bought alternatives such as Ragu, but also way more delicious.

Founded in the late 1930s in Rochester, New York, the makers of Ragu opened their first factory in 1946. Originally named the Ragu Packaging Company, husband-and-wife founders Giovanni and Assunta Cantisano started out cooking and bottling spaghetti sauce in the basement of their home before selling it to their customers from their front porch.

Originally from Naples, Italy, and armed only with her family’s age-old traditional pasta sauce, Assunta Cantisano in 1914 stepped onto a ship bound for America in search of a better life and future. But it wouldn’t be until the Great Depression of the 1930’s rolled around that Assunta would finally discover herself relying on her only valuable possession, namely the original Ragu pasta sauce recipe entrusted to her by her family.

Get a taste for WINNING! Play at a Canadian online CASINO.