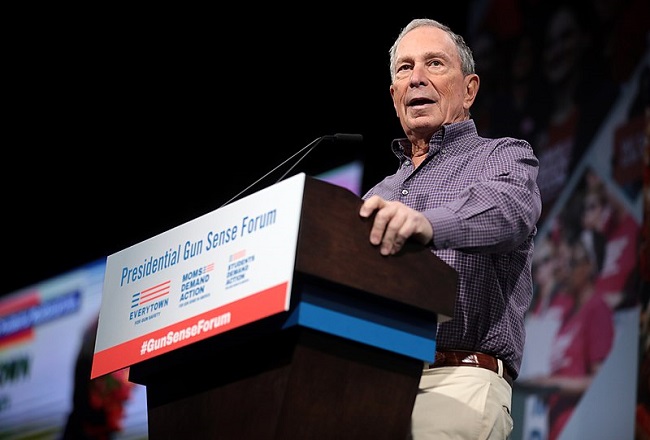 Former New York Mayor Michael Bloomberg made his first onstage appearance alongside his presidential rivals on Wednesday, February 19th, at Las Vegas Town Hall in Nevada. He landed the spot after winning 10% support or more in 4 national polls. Though his invitation was last-minute, his inclusion made for some explosive viewing.

Bloomberg has been unique in accepting no outside contributions, which has excluded him from several debates that have set donor thresholds as entrance requirements. New Democratic National Committee rules allowing candidates to enter the Charleston, South Caroline debate on February 25th, as well as the Las Vegas debate, were announced recently. Bloomberg’s poll results were thus enough to pave the way for the increasingly popular candidate.

The other means of gaining entry was to win at least one delegate in the New Hampshire or Iowa contests, which is what Minnesota Sen. Amy Klobuchar and former Indiana Mayor Pete Buttigieg were able to do. Massachusetts Sen. Elizabeth Warren and Vermont’s Sen. Bernie Sanders also qualified with opinion polls, with Bloomberg falling neatly ahead of Warren and behind Sanders for the most part.

Riding on a Wave of Advertising

The 2016 US Presidential elections were a clear demonstration that money can buy publicity and political clout, and though Bloomberg disagrees with Trump and is marketing himself as the best anecdote to the current incumbent, he is continuing the trend.

Digging into his own considerably cavernous pockets, the billionaire has funded a very aggressive advertising campaign that has virtually saturated the voting public with his image and message. This has drawn criticism from Warren and other rivals, who assert that the former Mayor’s success is down to his commercials and visibility alone.

The former New York Mayor was late to the race for the presidency, joining in November 2019 which was almost a year after his fellow candidates. Since then his take on workable plans to deal with economic problems in the United States, as well as his previous backing of gun control, environmental causes and various Democratic candidates, have increased his popularity.

Currently, Bloomberg is polling well voters older than 45 and moderates, while Sanders is doing better with women, college graduates, progressives and voters less than 45. The division in the democratic party is clear, and Wednesday’s showdown only made it even more so.

Warren and Sanders have already mounted their campaigns against Bloomberg by simply attacking him, accusing him of buying the election and referencing his previous remarks on how the discriminatory housing policy of redlining could be linked to the financial crisis, among other remarks.

On Wednesday night, their criticisms escalated to levels that might best be described as pugnacious. In fact, virtually every other politician on the stage took a swing at the debate newcomer. Just days before the critical Nevada caucuses, the Democratic candidates were reduced to duking it out with Bloomberg emerging quite battered and the party appearing divided. What happens on Saturday will certainly be revealing.