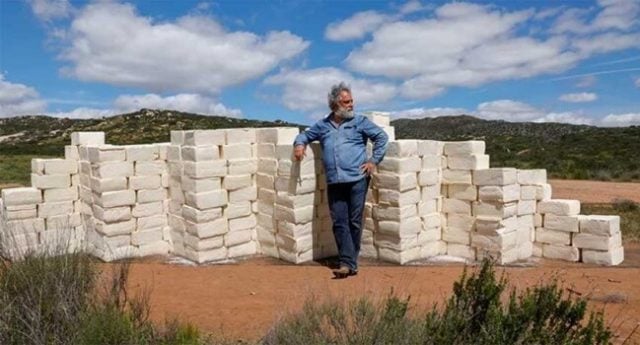 United States president Donald Trump might get his Mexico border wall after all, even if it is not built entirely according to spec. Montreal-born artist Cosimo Cavallaro started building the wall on 25 March, using little more than 200 blocks of expired Cotija, a Mexican hard cheese.

According to reports, the artist envisions a finished project that will stretch 400m – and require 8,800 more blocks of cheese that has passed its expiry date to complete. His chosen site is Tecate, California, and is less than 15m away from the actual border between the US and Mexico.

Cavallaro told reporters that he first had the idea for a wall made of cheese 20 years ago. However, he was only able to start realising it when Trump began demanding one be built as per his campaign promise.

He said that, when boundaries are encountered, the normal reaction is to go beyond them. This, at least, was the lesson he had drawn from his difficult experiences as the child of Italian immigrants in Quebec. The artist said that, even though he had been born in Montreal, his parents’ country of origin was used to justify xenophobic behaviour toward him.

Trump’s push for a controversial border wall enabled him to drum up some support for his artwork, but the artist will need more donations, if he is to see the project completed. The work ultimately is one of protest. In one interview, the artist said the possibility of an actual wall was a threatening one, but, after three days of building his cheese wall, he felt more secure.

Playing With His Food

The cheesy wall is not the first of Cavallaro’s works to be made from something edible. Food is one of his favourite artistic mediums.

While some works have been as innocuous as a room painted with tomato ketchup, others, such as a naked, anatomically correct, crucified Christ made entirely of chocolate invited public and ecclesiastical fury.

Cavallaro emphasised in several interviews that the cheese used in the construction of the wall along the US-Mexico border has expired, and is not suitable for human consumption. He also said that it was possible that the completed project may not look entirely as he imagined it would, due to the nature of the building materials.

According to the artist, pieces may fall off, or be eaten by animals. However, even if this were to happen, it would be part of an artistic process, which also was commentary on how humans consume and waste. Plus, he is doing his bit to make America ‘grate’ again!

Have fun and WIN big playing at a Canadian online casino! Sign up NOW.