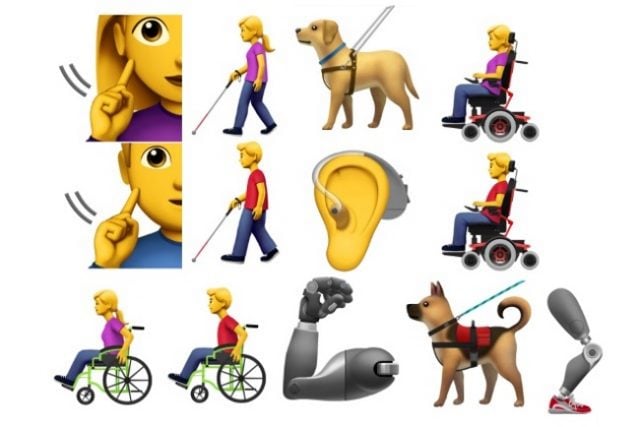 Celebrating diversity is one of life’s privileges. How very mundane an existence we would lead if we all came issued in standard format, so to speak. But fortunately for us, this isn’t the case. The human race is a many splendid thing, and so is the animal kingdom. Apple has long been committed to the cause of creating a global digital culture of supreme inclusion and this commitment is evident in everything from intuitive technology that lends itself to simple ease of access, to the tech giant’s diversity and inclusivity policy in the workplace. And so to discover that Apple has a slew of new emojis representative of people with disabilities planned for release later this year fits right in with what we know about the corporation.

And its high time too. After all, we already have access to all sorts of fun new images, including avocados and unicorns. And yet, up until now, images offering people with various forms of disabilities the opportunity to express their own humanity in a unique way that is true to self, have been sadly lacking. Thanks to Apple, this will not be the case for much longer.

Some of the exciting new emojis confirmed for release are wheelchair emojis, a hearing aid, prosthetic limbs and a guide dog. The upcoming public release of these and many more has been confirmed by the organisation responsible for the approval, release and management of emojis, namely Unicode. In fact, approval for the new additions was granted already in February. Apple however decided to schedule the release date so as to coincide with World Emoji Day later this year.

A spokesperson for Apple has said that the corporation considers the celebration of diversity to be integral to its core values and that the new emojis will “fill a huge gap in the emoji keyboard”.

Its In Actual Fact Long Overdue

Some have questioned why it’s taken Apple so long to realise the importance of proper representation for all of humanity. And for good reason too considering that according to a Canadian 2017 Survey on Disability, 6.2 million Canadians 15 years of age and older, had at the time lived with one or more disability that caused practical restrictions in everyday life.

In addition to better emoji representation for people living with disabilities, a number of new inclusions have been made to more effectively provide for multi-racial couples as well as differences in sexual orientation. For example, users will going forward be able to customise the emoji depicting a couple holding hands in 75 different combinations so as to accurately depict skin tone and gender combinations in relationships.