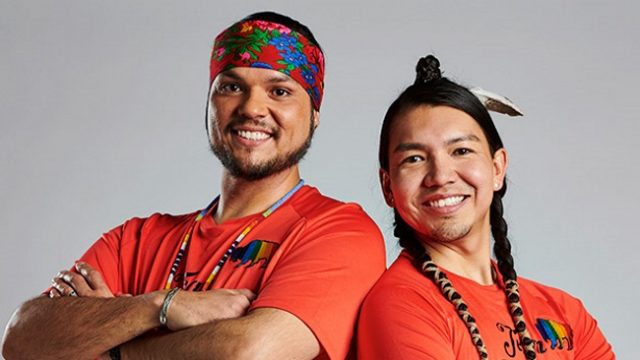 Canadians are a resilient and positively tenacious lot. This we know. This was once again written in the stars in a new and refreshing way when two-spirit couple Anthony Johnson and James Makokis proved their steel and determination by winning the notoriously gruelling The Amazing Race Canada.

But to Anthony and James, originally from Alberta’s Saddle Lake Cree Nation and Arizona’s Navajo Nation, winning the race is about much more than displaying true Canadian grit and determination. In fact, its more about winning the first prize money even, because when the married couple had first decided to enter the competition, they did so with a single goal and determination in mind and that was to educate viewers of the show about the issues faced by indigenous people.

The Importance Of Raising Awareness

The couple did so by donning various outfits highlighting important cultural issues and messages. Attention was called to very specific topics, including significant and ceremonial role of water in indigenous culture, as well as red bandanas worn to accentuate the plight of woman and girls who have gone missing as well as those discovered to have been murdered.

And its not over by a long shot now that they’ve won the race, say Anthony and James. Having created first awareness of the issues so dear to their hearts on the popular show, they now plan on keeping up the good work by driving new fundraising efforts for the benefit of an indigenous cultural healing centre in Alberta belonging to the Kehewin Cree Nation.

A Vacation Now On The Cards

They do plan on catching a well-deserved breather before getting down to the business of fundraising. Getting some sleep and maybe going on vacation, said the pair, are all part of the immediate plan. They jokingly quipped about the need to go on vacation in order to catch a tan, having not been able to experience summer for the duration of their participation in the world’s most famous race.

The 2-spirit duo was part of the show’s seventh instalment. The race was filmed earlier this year and was broadcast during the month of July. This year’s race started out in Toronto and proceeded all the way through to Muskoka, Ontario.

To Anthony and James, it had been important to utilise the platform and spotlight in order to raise awareness about various indigenous issues. Makokis, a family physician, and husband Johnson, a project consultant, both hold a special place in their hearts for women. According to Johnson, it’s important to highlight the issues faced by women in indigenous cultures. The kidnappings and the murders aren’t often talked about said Johnson, and it’s important that this changes.

Win BIG online. Canada’s BEST casinos are waiting for you. Are YOU ready?