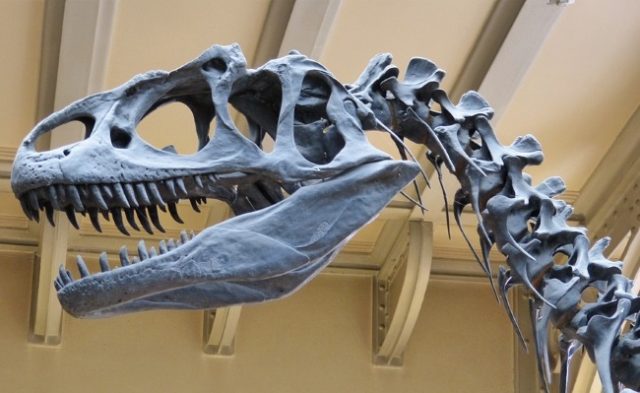 The Royal Tyrrell Museum in Alberta is among the growing number of institutions that are using 3D printing technology to replicate dinosaur bones. The printed bones complete skeletons in a way that has not been possible before, making the exhibits much more compelling for visitors and helping researchers learn more.

Genuine dinosaur bones, being millions of years old, are very delicate. Since they’re irreplaceable, it’s important to protect them at all costs. Amy Kowalchuk, a 3D technician for the Royal Tyrrell Museum, explained to CBC News how the printing technology makes this protection possible.

The most fragile specimens are kept away from the exhibitions, and bones that are missing can also be created to produce complete skeletons that can withstand the hustle and bustle of an exhibit. Kowalchuk, who recently replicated a jawbone for display, says the process starts by “taking multiple photographs from multiple angles”.

The photographs are then used to create a digital blueprint of the prehistoric finds, by triangulating the images using specialised computer programmes. From there, the 3D model can be built. The technology has been used to great effect in showing off some of Royal Tyrell’s most impressive fossils, including a 41-piece tyrannosaur specimen commonly referred to as the Exploded Skull.

As well as making dinosaurs come to life for fans visiting exhibits, the 3D prints are helping researchers to discover much more about these fascinating creatures. Curator François Therrien, whose work focuses on dinosaur brains, has been using reconstructed brain cavities to gain new insights into how the animals behaved. Among other behaviours, Therrien is looking at how they hunted.

The curator explains that before printing technology was available, attempts to reconstruct the brain shape or structure was very time-consuming and arduous. Bones had to be broken, or skulls that were already broken had to be used. Latex was poured into the specimens, and then it would need to be peeled out so that a cast of the brain cavity could be made.

There was plenty of room for human error, and potential for damaging the priceless finds. Now, the bones are scanned via computerised tomography and the images are uploaded to the 3D printer. The skulls are accurately replicated, allowing researchers to pose questions and investigate issues that would previously have been impossible. As new developments in 3D printing are made, even more dinosaur secrets might be revealed.

Why Caring About Your Looks Isn’t Being Vain

What’s Coming To Netflix In October?

Apple’s Craftiness Called Out By Ex-Director