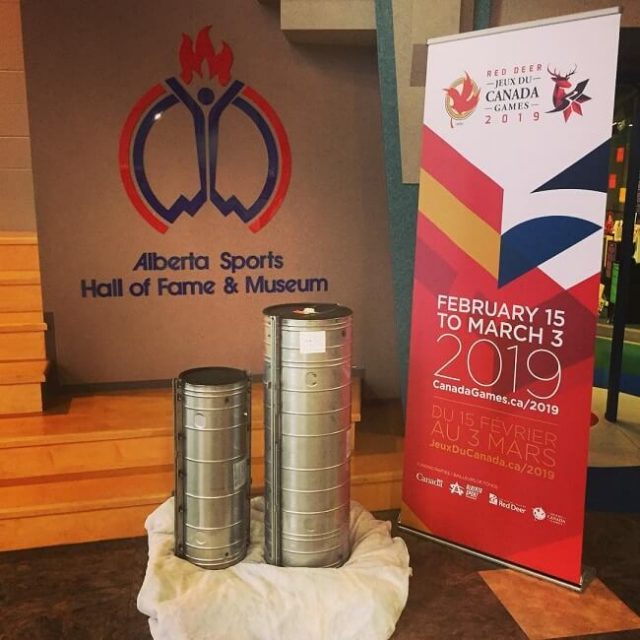 Anyone who has ever had the privilege of opening up a time capsule will tell you that it’s a very unique and special experience; the ultimate recognition of the tangible passing of time. And yet, not too many people have had the opportunity, and especially not one that has been sealed and waiting to be opened for going on 23 years!

23 years is exactly the age of the recently opened 1995 Canada Winter Games time capsule that is currently on display at the Alberta Sports Hall of Fame and Museum. Donna Hately, an Executive Director who has been employed by the museum for the last 20 years, tells the story of how she had been aware of the capsule’s existence for the last 20 years, but obviously, as time capsules go, did not have any idea as to its contents.

The capsule was entrusted to the museum by the Winter Games and was accompanied by the commission that it should be opened when next an Alberta community was awarded the good fortune of hosting the Canada Winter Games.

Items Show The Passing Of Time

The items in the capsule were collected by the torch-bearers of the 1995 Canada Winter Games as they passed through all of 15 Alberta communities en route to the where the Games were taking place in Grand Prairie.

The capsule was finally opened on January 15 and its contents revealed. The AGT (Alberta Government Telephones) Spirit of Alberta March of Champions Time Capsule is currently on display at the museum, and will be for the duration of the next couple of months.

A First For Alberta And Canada

According to Hately, the time capsule isn’t only a first for the province, but also for the Canada Winter Games, i.e. for the country. According to her knowledge, says Hately, it’s the only Winter Games time capsule currently in existence, and the first one associated exclusively with the games – Summer or Winter.

The 1995 exhibit currently on display at the museum contains a torch bearing the names of the 16 communities of Alberta. Some of the time capsule’s contents include a telephone directory, some civic cards and pins, a dinosaur pin, and a sealed mystery Ukrainian egg.

Want to bet on your FAVOURITE Winter sports? Sign up at a top sportsbook NOW!