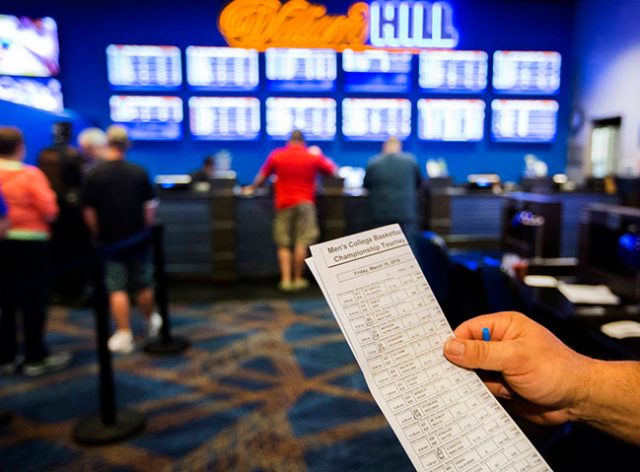 Prominent UK bookmaker William Hill has reportedly taken over Golden Entertainment Inc.’s (GE Inc.) Nevada racing and sportsbook operations. The bookie assumed control of the business through its US subsidiary, according to its official press release on the acquisition.

According to the release, on February 13, William Hill US started operating the Las Vegas-based firm’s sportsbooks at its Aquarius Casino Resort in Arizona, Arizona Charlie’s Boulder in Vegas, and Arizona Charlie’s Decatur as well. Also included in the deal is the sportsbook at the former Stratosphere, The STRAT, which is currently under construction and set to open its doors in late March.

The two firms already had a deal in place prior to the new agreement, which saw the international bookmaker managing the Pahrump Nugget sportsbook along with full-service betting kiosks at Lakeside Casino & RV Park and Gold Town Casino. In extending the agreement across Nevada, the brand now also has depositing wagering kiosks at over 80 Golden Entertainment-owned taverns, as well as at third party-distributed gaming locales across the Silver State.

Sports gambling operations at both the Edgewater Hotel and Casino Resort and the Colorado Belle Hotel Resort (which were purchased by Golden Entertainment from Marnell Gaming in mid-2018) will also apparently continue to be operated by the UK betting giant.

Joe Asher, the CEO of William Hill US, says that the addition of the four new gaming resorts to his firm’s portfolio has marked a thrilling new chapter in its business relationship with Golden Entertainment. According to Asher, his company is looking forward to working with the corporation to offer sports fans an “amazing experience” in years to come, both in Nevada and perhaps in other states too, should such opportunities present themselves.

CEO of Golden Entertainment Steve Arcana also shared his thoughts. He added that his company is excited to continue expanding its relationship with William Hill – a proven sports betting platform both in Nevada and elsewhere around the world. His firm, too, is looking forward to working with the bookie to grow its business in Nevada and other regulated jurisdictions as well.

The two companies are reportedly also aiming to pursue wagering opportunities in Montana and Maryland, subject of course to the legalization of sports wagers in both states. The states are both moving swiftly towards the regulation of their punting industries, with Maryland House Bill #989 being introduced this time last year. Unfortunately, the proposed bill did not progress in last year’s session.

Over in Montana, two wills have been submitted for the current session. HB #475 would legalize pari-mutuel sports wagering activities, and S #25 would permit sports pools and sports tabs within state borders. At the present, Golden Entertainment runs distributed gaming at 300 Montana locations, and also owns the Cumberland, Maryland-based Rocky Gap Casino Resort.

Ready to bet?
Sign up at Canada’s top sportsbooks or casinos ONLINE!