When You Feel the Need for Speed 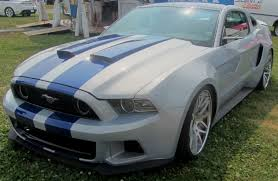 There is something undeniably visceral about racing cars. Even before kids start to play video games, they have probably played with car tracks and Hot Wheels racing sets or built models of sports cars and created their own tracks in their living rooms. Movies likeCannonball RunandFast and Furiousshow that racing cars is more than a recreation, it’s a lifestyle and state of mind.

Naturally, some of the first video games were based on the concept of car races. And the idea has only grown more advanced and more realistic. And now with the reboot of the Need for Speed series, the concept has reached its highest point yet.

The newest installment of Need for Speed puts you back on the street, racing for the respect of your peers . There is a cast of characters you encounter, and spend a good amount of time perfecting your vehicle. The combination is crucial. Anyone who takes car racing seriously knows that maneuvering around a track – or a highway or even a busy street – is only half the challenge. Getting the car to do what you want starts long before you hit the gas pedal.

Star in Your Own Movie

The experience of playing Need for Speed is about as close as you can come to starring in your own car racing movie. There are live action scenes with actors and an extremely realistic open-world set that expands as far as you want to travel. There are scenes between you and the other characters that take place outside the car to fill in the information on how you go about acquiring your vehicle and how to go about working on it to make improvements.

But the highlight, of course, is the driving, and that part is nothing short of breathtaking. The controls give you the tools to move through a variety of spaces. Best of all, as you advance in the game and make improvements to your car, you can feel the difference in the acceleration time and the handling, which is particularly important because you’re mostly driving on city streets that may or may not be clear of other drivers.

The game starts with a trip to the garage to pick your vehicle. You can change cars throughout the game, but doing so could undermine the improvements you make to one you’re using. So it makes sense to choose wisely in the beginning and to invest your effort in that particular car. Each has its particular qualities, however, and if you find that the fit isn’t right for you, you may be better off starting again than sticking to a car that’s less than ideal for the long haul simply because you chose it in the beginning.

Building Your Rep One Race at a Time

Since you’re new to the neighborhood, you need to work hard to gain the attention of the top local racers, who may or may not be looking to expand their circle. It depends on what you do on the road. You’ll face events such as the “diner dash” which pits you and some of the top drivers in a race to the local diner – and the loser pays. Each race is a chance to gain esteem and status, which ultimately helps in the acquisition of parts and service. The game allows you to move through five different camera angles of action. You can start the race with a first-person view as though through the eyes of the driver but switch to get a wider view of the road, the destination, and the other drivers.

The story frame helps Need for Speed go far beyond a simple racing game. It makes the races meaningful because they relate to higher goals. It also organizes the races in a way the advances the plot so that you’re always aware of the story taking place, as you would if you were actually living in the racing “underground” in a big city.

At the same time, it’s easy to see how Need for Speed is the culmination of an experience that started long before you ever picked up a video game system. It harks back to the time you created tracks in your house with the splashiest cars you can find. The adventures you dreamed up them come to life on the screen with Need for Speed.

No wonder it takes your breath away.