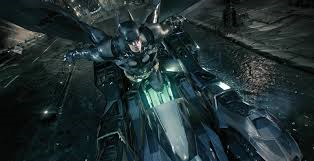 Comic books and the movies based on them are good inspirations for video games, especially when there is a great deal of story involved. For one thing, they already have a strong visual dimension that is often larger than life, like many video games. For another, they are set in a fully considered universe that is accessible to video game developers. Fans of the characters enjoy the chance to be the character, not just watch them interact with others. For all the times that a reader or movie-goer might think he or she would have acted differently if they were in the hero’s shoes, video games give them a chance to do it their way and see what happens.

And that’s the appeal of games like Batman: Arkham Knight, the fourth installment in the popular Batman: Arkham series. It’s set one year after 2011’s Batman: Arkham City, which featured the death of the Joker, once considered the ultimate Batman nemesis. The main villain – an extremely important element of the story as well as the main challenge of the game – is the Scarecrow, who is seeking both to destroy Batman and take control of Gotham City. And he has a partner, the mysterious Arkham Knight. Much of the action revolved around Batman’s combat ability, which is completely controlled by the player. There are also a great number of gadgets, as one would expect from a Batman game. Arkham Knight is also the first game in the series to make the batmobile available to the hero, allowing Batman to drive through dangerous streets in the bulletproof vehicle.

Great Atmosphere is Part of the Effect

As soon as the player opens the game, he or she has clearly stepped into a different world, one that is darker that the real world, and operates under a different set of rules. Of course, this world is Gotham City, which contains all of the action in the Batman universe. It is both a city that can be traversed and a whole world that contains everything that’s necessary within its confines. The color palette of the environment plays a key role in the action because it helps keep the story unified and, despite the darkness, keep the players oriented to their location relative to everything else in Gotham City. The weather seems to be perpetually gloomy, or even rainy, and the clouds are a permanent fixture. In Gotham City, the setting for the biggest battles by the biggest hero against the strongest villains, there is not chance for a clear, shiny blue sky.

It is in this setting that Batman is free to fly into action. In fact, he can literally fly, thanks to his Bat cape. The game lets Batman glide through the air for extended time, making it easier to make up ground when he is in pursuit, or to escape when he is being hounded by the villains. It’s one of the most elegant moves in a game full of smooth combat elements. The gadgets that were popular in previous games, such as the bat-arang, which comes back to his hands after he throws it, and the disruptor rifle, which can take out enemy weapons, all return in the latest version of the game.

A Lone Hero on a Mission

As a character. Batman is virtually the epitome of the loner. No one knows his true identity, and no one fully trusts his good intentions, no matter how much good he has done for the city over the years. Not surprisingly, the game is designed as a single player adventure. There is no multi-player action available. It allows players to feel the essence of Batman as a solitary figure driven by an oath to protect the city he loves. As it turns out, however, the Joker is not completely out of the action even though he has passed away in an earlier incarnation of the game. He returns as a projection of other characters, who had been infected by his tainted blood before he died.

And that leaves players alone to ponder the fate of the hero, alone fighting against the greatest villains of his time, all for the sake of a public that cannot love him for the protection he provides. He goes in alone and he leaves alone, In between, it is him and his gadgets against the world. Luckily, those gadgets are great fun to try out, especially against an enemy. So when someone says that Batman should have done things differently in the comics or in the movies, the theory can be tried out in the game itself.