The Past Comes Alive in Assassin's Creed 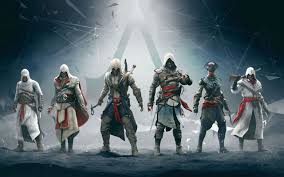 There is a theory in popular culture that things earlier generations thought were mostly lacking in educational value, such as television and even our beloved video games, are actually important parts of our education. The theory notes that television plots have grown more complex, teaching viewers how to unwind a complex story. And they point out that video games often teach important survival skills, decision-making, and even a bit of history.

For the last part, the theorists could have been looking at Assassin’s Creed as a case in point. Every game in the Assassin’s Creed series is set in a different historical period and captures some of the basic elements of that period. You can learn about which weapons were used in different time periods, how people traveled, and what the living conditions were in different eras.

Since Assassin’s Creed is not created to teach history, the lessons you learn are, essentially, incidental. And that is precisely why the game is such a good way to learn history. Or actually, it’s a good way to absorb history. Since you are always focused on the mission at hand, whether it’s to assassinate a key figure of the Third Crusade or to convince a pack of assassins in the 18th century to change their ways, you are experiencing the differences in time on a fundamental level. You not only see and feel the way weaponry and mobility have changed, you actually make use of the differences to accomplish your missions. The better you understand the period you are playing, the better you’ll play the game, and ultimately, the more fun you’ll have.

Can there be a better teaching tool than one that is designed to maximize fun? Assassin’s Creed is great fun, that that’s why it holds so much cultural value.

Two Sides to Every Story

The Assassin’s Creed series is based on a simple premise, which sets off all of the action. It is essentially focused on the battle between two groups of people. There is the Brotherhood of the Assassins and the Knights of the Templar, forever destined to serve as opposite forces of history. The open world game also extends to historic settings such as Jerusalem, Acre, and Damascus.

The games released so far cover a broad sweep of history, starting with the Third Crusade period, followed by the Renaissance and the colonial era. The French Revolution, Imperial China, Victorian England, and the Sikh Empire are also represented. Some of the games cover a whole era by themselves, while others closely related to the previous game and can be considered something sequels of a sort, though usually with a different set of characters and new game features.

The characters, of course, are as important as the setting. There are natural conflicts to explore, and the developers do a great job setting ups the plots to make the games as absorbing as possible. Assassin’s Creed: Rogue, for example, focuses on a character named Shay Patrick Cormac, an Assassin who joins the Templars and must face the wrath of his former brotherhood. The character is committed to his mission but finds it difficult to move against his former allies, heightening the tension throughout the game.

Stunning Battles Across the Eras

Assassin’s Creed: Rogue, set during the colonial era, also features an exciting and fast-paced series of battles that take place on ships and across the open wilderness. The setting, however, provides so much opportunity exploring a particular time and place. Set in New York in the early part of the 18th century, the game includes maps of the rivers and the landscape. If you play the game to the end, you will have incidentally taken a long guided tour of New York as it was before its current state as a massive metropolis.

Rogue is itself a sequel to an earlier title called Black Flag, which introduced the concept of sea battles in the setting of the Caribbean during the golden age of piracy. It is based primarily in the cities of Kingston, Havana, and Nassua, but it’s map – and open world capability – includes 50 other cities.

So while video games have often been dismissed as mindless or violent, they clearly offer benefits that are not recognized as quickly. But games like Assassin’s Creed, which is also violent, though never mindless, have side benefits that are clear to the people who play them. Best of all, those benefits are woven into the fabric of the game so subtly that no one has any need to resist the lessons they offer.