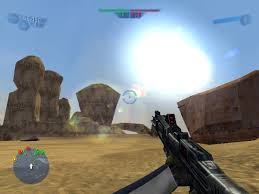 The latest incarnation of the Star Wars series is going to break the box office – if not the entire Internet – before the end of the year. But gamers who love the series can get a taste of the action ahead of time with Star Wars: Battlefront, a massive multiplayer adventure that puts players into battle scenes right out of the movie. And they don’t have to wait for the movie’s release to start playing. Star Wars: Battlefront will be available more than a month before the film, just to get fans itching for the launch of new trilogy.

Players can choose between joining the Empire or joining the rebels as the two sides face off in an epic battle for control of the universe. The realistic graphics look like footage from the Star Wars universe, and the controls give players the full range of actions they need to fight their way through the enemy lines. Whether it’s a battle in the snow covered peaks, the grassy wilds, or the deserts of the home planet, the action is fast and furious. But it’s not just any old gun battle taking place on the screen. It’s the authentic Star Wars battles of good versus evil. But instead of film directors deciding how to screen the action, the players are the ones in full control.

Designed with the Fan in Mind

Star Wars: Battlefront was developed scrupulously by Dice for as many as 40 players at the same time, a single player in “survival mode,” or with another player through a split screen. A Dice executive explained that it’s “the Star Wars game that, as fans, we’ve all dreamt of playing.” There is no doubt that the chance to dive into the Star Wars scenes would be irresistible for hardcore Star Wars fans. But anyone who’s been watching the latest Star Wars trailers and getting excited about the next wave of films would also feel a level of satisfaction from Star Wars: Battlefront.

The game moves through as many as 15 waves, with each new wave bringing bigger challenges and stronger enemies with bigger weapons. Players start out choosing their own weapons, and the enemies at each level are true to the films. Those who play on the side of the rebels face off against Storm Troopers. In the early levels, it takes just one shot to take them out. As the waves more forward, the Storm Troopers themselves get tougher, withstanding more hits than ever. The challenges grow alongside the level of excitement.

Although the movies clearly posit the rebels as the force of good in the universe confronting the ultimate evil of the Empire, Star Wars: Battlefront gives players to option to play on either side. And as they get further along the levels, they can even become the drivers of speeder bikes and other fancy land vehicles. Early reports by enthusiasts who have tried out advance editions of the game noted that there does not appear to be any option for space fighting. But they added that the land-based action is so thrilling and so true to the look and feel of the films that it has little impact on the overall experience.

The multi-player action allows players to engage each other, not just the computer generated enemies. However, even as a single player, the obstacles are formidable, with snipers jumping out of unexpected areas while players are focused on other threats.

The game is perfect for anyone who has seen a Star Wars film and longed not only to watch the action but to become a part of it as well. And with the growing hype around the release of the new film, Star Wars: Battlefront may be the ideal bridge between watching and living the movies.