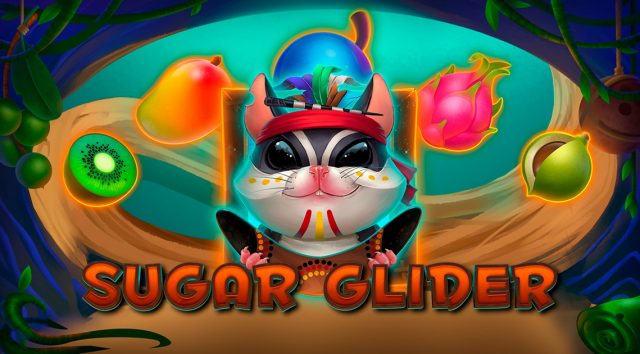 With a pays both ways feature, 5 reels, 10 lines, and lucrative expanding wilds, the new Sugar Glider slot is set to offer some big winning opportunities for Canadian players.

Czech-based developer Endorphina has now released the title, which is one of their final releases for the year, to online and mobile casinos worldwide. The title is based on the notoriously adorable animals that inspired its name, and was unveiled for the first time by its creators at SiGMA 2018 in Malta.

The Glider vs. the Praying Mantis

The game is set in the heart of a tropical forest, and its 5 reels are filled with an array of brightly coloured fruits and, of course, sugar gliders as well. The main character is in the form of one of these majestic creatures, which is portrayed complete with tribal face paint, an interesting headpiece, and an artistically designed wooden bowl in his paws.

This character is in charge of protecting his forest from any dangers that may present themselves – especially the nefarious praying mantis. He appears as the expanding wild symbol in both the base game and the bonus rounds to add extra wins to your bankroll.

The graphics of Sugar Glider are more on the cartoonish side, but are also very colourful and well rendered to balance it out. This gives the game a modern and high-quality feel, despite an absence of complex bonus rounds or features. The background soundtrack is a calming tribal tune that adds to the overall experience, helping to keep you immersed for longer each time you play.

Win Both Ways Across 5 Reels

The Sugar Glider slot machine is relatively simple to play, with just 5 reels, 10 fixed paylines, and no special bonuses to unlock or achievements to make. One beneficial thing that you might notice is that wins across the paylines are paid as long as they land on adjacent reels, even if the combo lands on the second or third reels.

The most lucrative symbol to keep a lookout for here is the praying mantis wild, which can replace all other symbols in the game and expands to cover entire reels when it appears. Additionally, when this symbol lands stacked on the middle reel, it will instantly expand in all directions and add 9 wilds to the mix for some particularly juicy prizes!

While it might not be hugely innovative in terms of its bonuses or gameplay style, Sugar Glider is sure to thrill players anywhere with its gorgeous graphics, entertaining theme, and exciting expanding wild icons. Its simplicity also makes it ideal for beginners, while seasoned punters are almost certain to find something they love about the new Endorphina release, too.