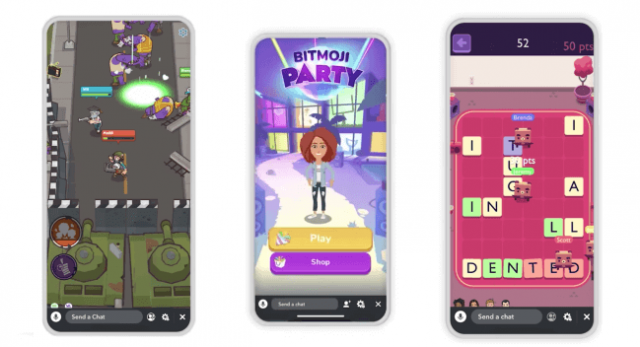 Popular private messaging platform Snapchat first gained popularity as a discreet messaging service allowing users the peace of mind of knowing that once a message has been viewed on the intended recipient’s screen, it is immediately automatically deleted. The only way that a Snapchat message could be saved, was to screens-shot the relevant message, in which case the sender would immediately receive a notification that this has been done.

But the service has come a long way since its humble beginnings, and the latest news is that Snapchat now plans on launching its very own gaming service that will allow friends to play against one another in real-time format. The Snap Games application will be accessible from within the Snapchat messaging feature and will be launched instantly by clicking on the special “rocket” symbol.

When Social Comes To Town

But the new feature will also incorporate a full-scale social element, and will include voice as well as text chat functionality. According to media partner Edgadget, Snap Games’ first title scheduled for release, namely Bitmoji Party, draws its inspiration from Nintendo’s Mario Party. It includes a 3D Bitmoji avatar, which will be used to play a series of mini games and users will be able to invite up to 8 friends to the party.

According to reports, despite the fact that Snap Games is a division of Snapchat, the latter had some help from some of its own friends with the development of the new feature, including Zynga, Game Closure, Spry Fox and ZeptoLab.

The announcement did not come as a surprise to those who have been following regular gaming news headlines. The parent company of Snapchat, namely Snap, last year acquired the rights to a small Australian development company, and according to those in the know, the acquisition wasn’t the only one of its kind.

Gaming elements, albeit on a smaller scale, have been implemented on the platform since early 2018, when AR games started to make their appearance inside of the app. These were promoted under the banner-name of Snappables.

It’s obvious now, with the added benefit of hindsight that Snap had been greasing the passage for a more full-bodied gaming service to follow, and in a very subtle and almost covert kind of way. More games are expected to be launched soon, including a Fortnite-style battle-type title called Battle Royale where the main mission will be to loot and shoot.

Looking for the BEST REAL MONEY games? Sign up at a Canadian online casino!