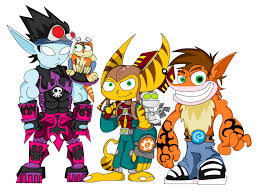 With the Skylander series of “toys to life” video games, it’s hard to know which direction the game is taking. Is it bringing the real world into the games or bringing the games into the real world. In some ways, it’s a combination of both. The battle games are played on video screens, sometimes mobile video screens, but are based on toys and other objects that exist in the world beyond the screen, that is, the real world. Action figures – and their vehicles – come with tags, and when placed on the game consoles, the characters appear on the screen ready to use their special powers and supercharge their vehicles on missions to save Skyland, their home planet.

The characters are called Superchargers, and that they are able to do things in the context of the video game that they can’t do with just the action figure separate from the video game. They can also modify and improve their vehicles, which play a huge role in the action since they allow them to move quickly through the Skyland world, participate in races, and do tricks. In some multiplayer platforms, the racing can take place between different characters controlled by different players, turning the game into a massive racing adventure through different terrains and even through the air, land, and water. Players can also cooperate to defeat the evil enemy at the heart of the game.

Action Figures that Come to Life – on Screen

The characters embody elements, such as light and dark, as well as air, fire, magic, and even undead, among others. Different modules of the games offer additional features, and introduce new characters, which invariably have different powers than the previous characters, making the world more dynamic. The goal of the game – preventing the evil villain from taking over the world – remains consistent throughout the changes that take place.

The toy figures are the stars of the games, and they come with well-developed personalities. The more of them you have, the more characters you can bring into the adventure. That means purchasing lots of collectible toys, and accessories. But in an older generation, toys coexisted with television shows or movies, like Masters of the Universe or Star Wars. Today they are infinitely more interactive and dynamic and allow you to have your own adventures with the characters that are not simply recreations of ideas that took place in a show or movie. The level of creativity, ultimately, depends on the individual players, though the Skyland platform and the various skills and abilities of the characters provides a great deal of opportunity.

Soon to be a Card Game

While the larger video game remains popular, the next development for the Skyland universe announced by the game developers is a card game for the mobile phone. The cards are available for purchase in separate packs, or even in-game. The cards are also coded, and when scanned into the phone or tablet, they bring the character on the card to life, or even two of them together to form a tandem to cooperate in the main mission. It is even possible to use the multiplayer function to bring a whole team together. The cards become substitutes for the toys, though less dynamic than the bigger versions of the game played on bigger screens.

The Skylanders franchise is leading the way in the new direction of turning real life toys into elements in video games. In turn, the game produces experiences that expand the scope and breadth of the toys, and lead to other spinoffs, bringing more and more real life objects into the fabric of the game. While once it would have been a fantasy to watch a toy jump into the screen and become part of that world, today it’s happening on a most advanced level. The real world is increasingly becoming the raw material for games on the fantasy level.

Or maybe it’s the other way. Maybe games are becoming the extension of objects in the real world, which function fine without the games but have another side to them that makes them more dynamic. Either way, the games are fun, and that’s the final analysis.