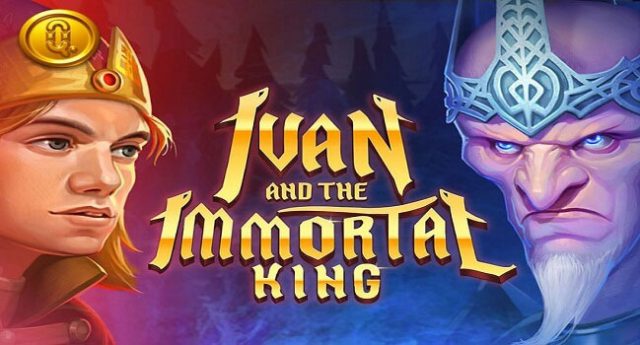 How many online slots do you know of that are inspired by Russian fairy tales and folklore? Well, if that’s the kind of theme that you’d love to see more of, you’re in for a treat thanks to Quickspin’s latest release.

Swedish slot machine creator Quickspin, a subsidiary of Playtech, has just launched its newest online title, called Ivan and the Immortal King. The game is based on a traditional, ancient Russian legend, and comes as the developer’s second-last release for 2018.

Drawing inspiration from some of Russian folktales’ most memorable characters, the engaging and action-packed slot is focused on one main hero, Ivan Tsarevitch. In terms of winning potential, it packs plenty of punch in this arena too with its multipliers, free spins, and bonus scatters that can be unlocked during base gameplay.

Commenting on the new release, Quickspin CEO Daniel Lindberg commented that his team delved deep into the lines of ancient Russian fairy stories to bring the unique tale to life. In his words, they enjoyed every minute of designing the new slot, and are sure that players will revel in all it has to offer for many years to come.

Lindberg also added that 2018 has been a great year all around for his company. Himself and his team are now looking forward to bringing their dedicated players even more fantastic games over the coming year and beyond.

The release of Ivan and the Immortal King has followed those of several other smash-hit Quickspin titles in 2018. Just a few of them include Big Bot Crew, the Ark of Mystery, and Eastern Emeralds, which are available to enjoy at all of the developer’s online and mobile casino operating partners.

About the Team at Quickspin

Established in 2011, Quickspin quickly became one of the iGaming industry’s leading development studios for social and real money casino games. The company was purchased by UK giant Playtech early in 2016, and has since gone on to become licensed in multiple regulated jurisdictions. Its award-winning titles have helped it to ink deals with a massive list of popular operators as well, which has only furthered its success.

Quickspin is based in Stockholm, Sweden, where it develops innovative online video slots for both the real money and free to play iGaming markets. Its team currently consist of more than 70 industry veterans and seasoned professionals, who have caused a major shift in the market with the innovation, quality, and immaculate engineering of their premium slots.