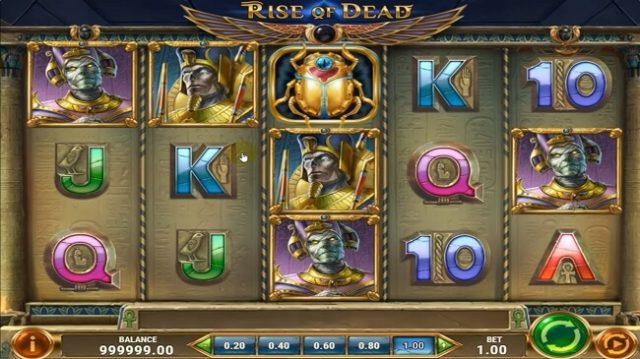 Fans of Play n GO’s Book of Dead will be happy to know that the developer has just released a sequel to the popular game. Rise of Dead promises more of the same in terms of gaming action and popular features. The new title strongly reminds us of the Egyptian cult classic slot Book of Ra, a title owned and developed by Novomatic.

But don’t be fooled into thinking that it’s just more of the same and in essence a clone of an existing slot, because Rise of Dead may appear to be pretty standard at first what with its 5 reels and 20 paylines, but it’s actually everything but your standard everyday game.

The paylines are fixed and the minimum bet is $0.20.

For a start, consider the fact that the top return is a 5,000x multiplier. Thanks to the maximum allowable bet per spin, what this means is that Rise of Dead has the potential of coughing up a very impressive $500,000 when played at maximum bet! Pretty impressive for a game that doesn’t lay claim to being a progressive jackpot slot.

The Return To Player percentage is fixed at 96%. This may appear to be slightly lower than that of some of Play n GO’s other slots, but it’s still fairly decent. And considering that half of a million dollars is potentially up for grabs, a decimal of a difference is a small price to pay when looking at the bigger picture.

There is no shortage of special and exciting additional features in Rise of Dead. One of our favourites has to be the Mega Stacks feature. And better still, has been incorporated into the base game. For every spin, a stacked symbol is added onto the reels. The stacks can grow to become 20 symbols strong and when a match-combo finally falls on a stack, it makes for some pretty awesome wins.

The game’s scatter symbol is the Egyptian scroll. Three or more scrolls anywhere on the reels will trigger 10 free spins. Better yet, the free spins bonus round can be re-triggered an indefinite number of times.

Another special treat is the Gift of Gods feature. Whenever stacked symbols of the same kind fall on reels 1, 3 and 5, this special feature is triggered. As soon as the feature is activated, reels numbers 1, 3 and 5 lock into place, with only the remaining two reels spinning from that point onwards. This can make for some fantastic and super-size win combinations.

Ready to WIN? Get those slots reels spinning online NOW!