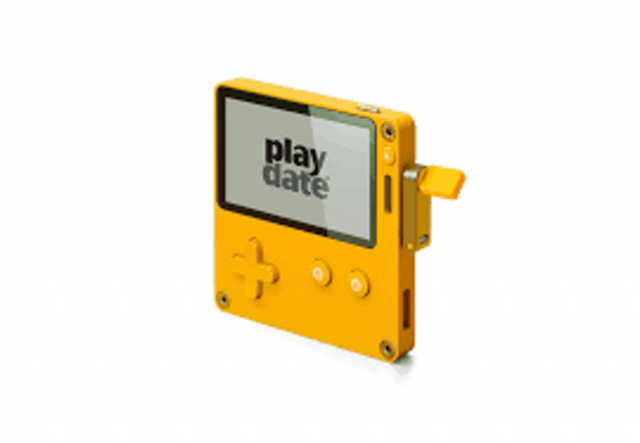 If the Game Boy-style charm and 8-bit adventures of days gone by are loving memories to your present mind (adult or otherwise), then you may want to listen up because there’s a new kid on the retro-style hand-held console gaming block. Anyone who has ever known the guilty pleasure of blowing on a cartridge to make it spring back into working action is bound to feel a pang of familiarity with games creator Panic’s new indie-style hand-held, Playdate. And did we mention that it comes with an actual crank and will only be available in yellow?

Panic happens to be the same company that brought us Firewatch and Untitled Goose Game, and the company has said that with Playdate, it hopes to bring some Game Boy-style charm to the lives of 21st Century gamers.

High-Res Black & White Is In

Playdate is a small device and comes kitted out with only a single, small two-directional control pad. There’s also the earlier-mentioned manual hand-crank. The display is described as “high-end black and white” and if you’re wondering if such a thing is actually possible in this present-day universe, then yes, according to Panic, it very much is. The display is described by Panic as sharp and clear, with no blurring lines present.

But perhaps even more surprising than the thought of a “premium-style” black and white device display, is the mode of delivery when it comes to gaming content. According to Panic’s Playdate product release notes, new games will be made available on a weekly basis and the mode of delivery will be very much reminiscent of typical television show program deliveries. Games released over the course of the initial 12 weeks (the assumption being 12 games) will be grouped together under the banner of “Season One”.

Panic did indicate that new games will attract additional charges. No surprises there, then.

But what will the actual games be like? Panic has so far only revealed some information about the first game to be released as part of Season One.  Crankin’s Time Travel Adventure will be first up. Developed by master games creator Keita Takahashi (Katamari Damacy), Crankin’s Time Travel Adventure will be joined by more creations from top Indie-style games developers, including Typeshift’s Zach Gage, Bennett Foddy (QWOP) and The Last Rocket’s Shaun Inman.

Panic wasn’t willing to reveal too much more about the upcoming games, saying that the idea was to keep future games fun and surprising.

Have fun and WIN on the GO. Play at Canada’s TOP mobile casinos anywhere, any time.