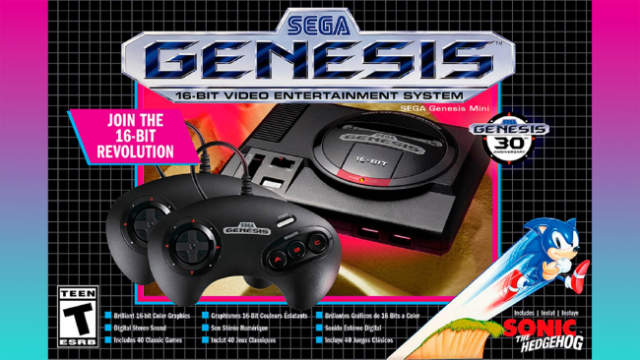 It was the stuff that dreams were made of. Being gifted your very first Sega Genesis console. Owning one of these bad-boys meant instant popularity among friends in the 80s and 90s. So popular did the console turn out to be, that 30 million units were sold worldwide during that time. Which is why the news that the Genesis is about to be revived and getting its very own mini-console not only makes that old excitement rush back in waves of good-old-days bliss, but also serves a bigger and significant purpose.

Now that Genesis is getting its own back, the best games of the classic 16-bit era will finally be getting the 5-star treatment that they have always deserved. These were the games that happiness was made of, after all. And the good news is, we won’t have to wait much longer to get our sticky little mitts on a new Sega Genesis Mini. According to Nintendo, September 19 is the official release date and at $79 a pop it shouldn’t be too difficult to make games heaven swing your way.

So what are we do expect and how will the new Genesis Mini stack up against the original Genesis? Hats off to Nintendo for what they’ve done in the essence of true nostalgia. They’ve recreated the old cartridge slot trap door, bless their souls! And even though you won’t actually be plugging cartridges in into the slot, it just would not have seemed right not to have it present. The mini, says Nintendo, is based on the 1989 hardware release, as that was a particularly good year in terms of sales and general look and feel.

On to the controllers. These will include the three-button format, and not the follow-up 6-button release. The idea was obviously to keep it as close to the original release as possible. Best of all is that the controllers are full-size, which makes for better handling. The fact that this makes them completely out of whack size-wise, instead of making the entire thing seem out of balance, actually ads a certain quirkiness to the setup.

They will be kitted out with 6-foot cables. Right on too, as wireless would not have fit the nostalgia bill after all.

Classic Games Get a Modern Makeover

And now, the games. Sonic the Hedgehog, Altered Beast, Street Fighter II – they’re all there. And for good measure, so are Tetris and Darius, two games that did not form part of the original Genesis bundle.

A bit like meeting up with old friends really.

Enjoy hot slots, terrific table games and SO much more. Play at a top ONLINE CASINO!