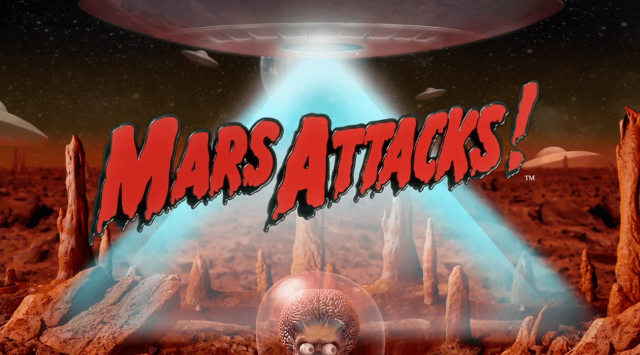 British iGaming specialist Blueprint Gaming has unveiled one of its first slots of the new year: a licensed release called Mars Attacks! Based on the classic Warner Bros movie of the same name, the title comes as the fourth such slot machine created in partnership with the American film giant.

Mars Attacks! is a 1996 blockbuster directed by none other than Tim Burton. The tongue-in-cheek film features Jack Nicholson, Glenn Close, Sarah Jessica Parker and Pierce Brosnan, and follows the hilarious antics of the American populace as aliens grace Earth for the first time. As for the casino game version, it follows in the footsteps of some of Blueprint’s most iconic branded releases, including Thundercats, Top Cat, and The Goonies.

The 5×3 title boasts real footage and stills from the movie itself, along with five perfectly themed modifiers; Mega Shrink Ray (which turns the reels into a 5×5 set), Radiation Blaster and more. There are also four bonus rounds to enjoy, aptly named Martian Takeover, DNA Analysis, We Come in Peace, and Spy Hunter. These all lead up to one main event – the Final Stand.

There’s even an Alien Invasion gamble feature to keep things interesting, and Martian Modifiers to alter the reels and provide up to 3,125 paylines. Naturally, this makes for some huge winning potential, while memorable characters and an epic storyline will appeal to members of all generations who remember seeing the source material upon its debut.

Possibly the most important feature of the new release is the whopping payouts it can produce. The game boasts Blueprint’s Jackpot King Deluxe progressive jackpot feature, which links various titles and guarantees a fixed payout through its two separate pots. Both pots need to be won by a certain cut-off point, and if you happen to be gambling at that time, you could be an instant winner!

Jo Purvis, the Director of Marketing at Blueprint, has noted that Mars Attacks! is an iconic sci-fi film that his company has brought to life for all of their valued partners and players. According to Purvis, the slot is one of Blueprint’s most ‘engaging titles to date’, with a plethora of bonuses and an action-packed premise that will thrill fans of the film as they progress to the massive comedic finale.

The director also iterated that Mars Attacks! is optimized for play on all modern devices. This includes smartphones, tablets, desktops and laptops, and its HTML5 format means that no operating systems are excluded from the fun, either. A fun preview of the game is also available on YouTube.

Get those slots reels spinning online! See if YOU can hit the jackpot today.