MADD Canada Has A Clever VR Trick Up Its Sleeve 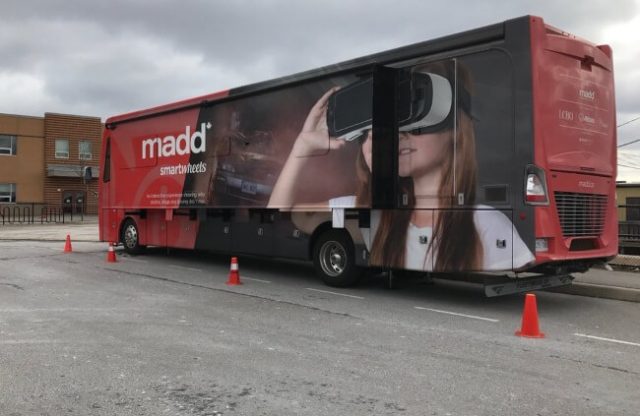 It’s one thing to be teaching kids about the dangers of driving under the influence of alcohol, but now that cannabis has been legalised in Canada, it’s important that the concept behind the lesson be extended so as to include the dangers of driving high. And what with studies showing that kids are making use of alcohol as well as cannabis from as early as age 11, MADD Canada had no other option but to get creative with their lesson plans. And what better way to teach even young dogs new tricks that with the aid and support of a hands-on recreational gaming-style experience?

It’s all of 42 feet wide and kitted out with a larger-than-life screen, individual seating stations and virtual reality goggles. If its all beginning to sound like a gamer’s dream come true, then that’s because MADD’s new SmartWheels mobile classroom is supposed to resonate with the young and fun at heart.

Hi-Tech For The Attention Win

SmartWheels pulled up to a school in Prince Albert not too long ago and children currently attending grades 4 through 6 were invited to experience what it feels and looks like to drive while impaired. Only the second of its kind, SmartWheels presents kids with a choose-your-own-adventure decision-making scenario that is brought to life thanks to VR technology.

34 students can be accommodated at any one time and the vehicle is now scheduled to accommodate more than 9,000 kids attending a total of 100 schools over the course of the 2020 school year. The vehicle started out on its maiden voyage by doing the rounds at Regina schools some weeks ago and proved a grand slam popularity success among students of all ages.

Getting In Young Is Crucial

Saskatchewan Government Insurance (SGI) and the Saskatchewan Liquor and Gaming Authority (SLGA) funded SmartWheels jointly. The total cost involved in the design and manufacture of the custom-made learning station came to $700,000, of which $500,000 was put forward by the SLGA, and the balance from the ranks of SGI.

Minister and spokesperson for SGI, Joe Hargrave, said that its a happy event to be partnering with MADD and that SGI considered it important to “catch kids at a young age”. Hargrave said that teaching young kids about the dangers of driving while impaired will cause them to think once they get to be a little older and have to start navigating peer pressure and all of the elements of uncertainty associated with entering one’s teenage years.