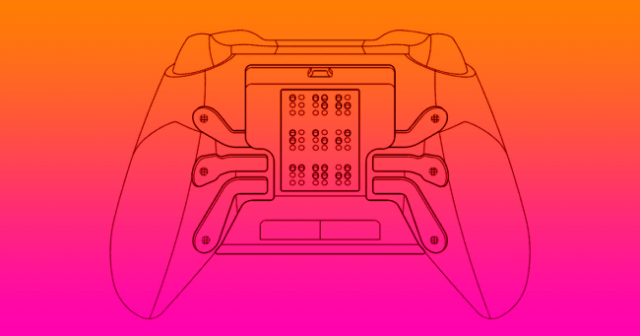 Microsoft has revealed just a sample’s worth of information about its latest patent, but it’s been enough to attract its fair share of attention. The tech and software giant’s latest idea ties in perfectly with the company’s recent focus on accessibility, and in many ways, the new culture of inclusivity that seems to have taken hold from within the company’s ranks. Microsoft may very well go all the way with the development of a new Xbox controller with a fully functional on-board Braille display. The idea has progressed all the way through a registered patent and soon, it will be on full display at the upcoming E3 games convention.

Video-to-audio translators are nothing new, and many software developers have over the years committed themselves to the cause of the visually impaired. There is much in the way of tech and gadgetry on the market, all designed to make life just a little bit easier for those who are unable to see, or even just unable to see well. But much of what’s already on the market is geared at every-day practical applications like using a mobile phone or simply getting around.

Not much has been done in the name of good old gaming fun. Until now, that is.

Read More…Sonic Gets A Make-Over After Internet Poll

The Gift Of Sight Is Mighty

When trying to fathom what it must be like to live life in a state of visual impairment, imagination only serves the seeing individual up to a point. Most of us would not even know where to start to try to understand what it must be like not to see. Much like having two broken thumbs, the realisation of the sheer value of having thumbs only really hits home when the faculty of thumbing about has been temporarily suspended for whatever reason.

But without even trying to understand the scope of it all; of doing something as simple as making one’s way around the house, even; try and imagine just for a minute what it must be like to have a go at a video game being unable to see or focus. All forms of text and visual cues have been converted into sound. Some annoying voice (most voices tend to become annoying after two thousand repeats) reads out loud the game stats, the location of the first-person avatar, the location of the enemy, the new location of the enemy, and on and on it goes.

Thanks to Microsoft’s new Braille-enabled games controller, audio cues may soon be what it was like in the “old days”. The Braille Controller, which also happens to be the patent’s official registered description, in many ways resembles a typical Xbox One controller. Until the gamepad is turned over, that is. On the back, there protrudes a sort of insect-like piece of hardware that closely resembles what one would imagine a robotic spider to look like.

The robo-spider is actually a Braille-display, complete with dot-matrix capabilities so that it may produce the Braille right where its comfortable for the visually impaired gamer to “read” the prompts with his or her fingers. For interaction’s sake, there are also various sets of swappable paddles.

Microsoft has not always been everyone’s top favourite in the world of tech, and for various reasons. But it’s only fair to give credit where its due, and this time round, they’re showing at least to a small extent, that they’re capable of more than just steam-rolling shamelessly over their competitors.

Get in a game! Play for REAL MONEY at Canada’s BEST online casinos.