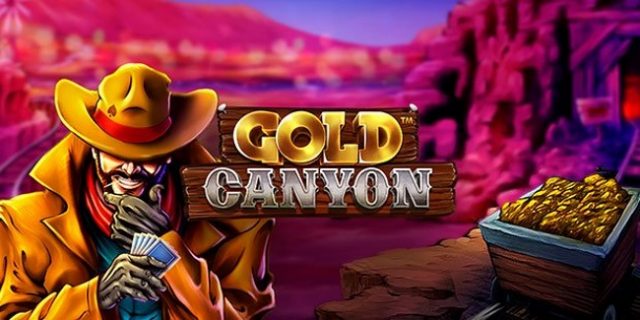 Slot fans had better hold on tight or prepare to be blown away. So says top games developer Betsoft of its new Gold Canyon slot release. Betsoft Gaming officially released its latest creation on July 23rd and everybody’s invited to the ultimate cowboy blow up.

The scene is set and the story primed in a town with no name and the cowboy star of the slot show has a dark and dubious past and many dangerous habits to boot. The bad-boy cowboy is now committed towards fighting for a different cause: upholding justice and protecting the town form the evil whiles and schemes of outlaws.

Special features and symbols include Frontier Action, a special mini bonus game jam-packed with exploding scatters and full-reel expanded wild cowboy symbols, and also the Scatter Pays feature, which is triggered when three or more scatter symbols appear on the reels during any single spin, forming a bundle of highly explosive dynamite. A special bonus spin is rewarded for every bundle of dynamite that explodes on the game’s reels.

The most a player can win whilst playing Gold Canyon is 4,000 times their bet, which is of course hard to beat as far as awesome slot titles go. Gold Canyon is an exciting new title to have come from the ranks of Betsoft Gaming and its bound to enjoy a lot of momentum among players all over the world.

Congratulations Are In Order

Betsoft has been enjoying a great deal of success on the development front and the company has been reaping the rewards of its commitment to quality in gaming. The release of Gold Canyon followed hot on the heels of another historical milestone when Betsoft was awarded for the first time ever an EGR B2B award for being top innovators in RNG casino software.

The developer beat an entire squad of top contenders to the post and winning the reward is being described by those working within the developer’s ranks as being a real dream come true and a gigantic honour and show of recognition.

Betsoft received top praise at the Tower of London event and judges from all over the world had the final say with regards to who all would be leaving with a top reward this year. Betsoft is on all counts deserving of the special acknowledgement.

Spin the reels of the top slots ONLINE! See if YOU can hit the JACKPOT.