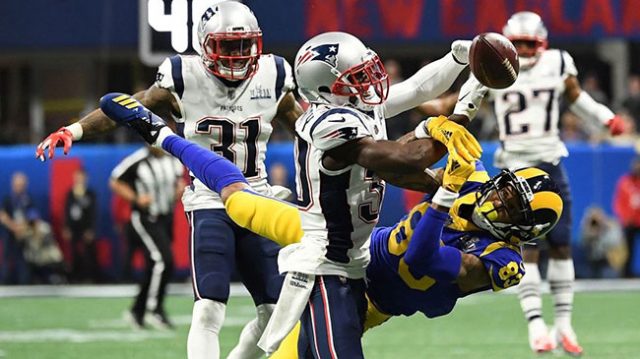 Wagering on this year’s Super Bowl has been described as anti-climactic for many, especially when it came to betting volumes (not to mention the games). The NFL marquee contest was something of a let down on the field, but it did mark the first time that legal bets on its outcome were on offer outside of Nevada, making it a historical event nonetheless.

Beginning in Nevada, early figures have shown that the day’s total betting handle came to just under $146 million – around $12.6 million lower than 2018’s record. With that said, this year’s net win numbers came in at an impressive $10.8 million, marking a hefty improvement over last year’s $1.1 million.

One particularly fortunate punter at the state’s South Point casino sportsbook wagered just $250 on the day, and managed to turn it into more than $100,000 after taking a 400-1 chance on the Rams earning exactly three points. Some have argued that this was the most exciting part of the entire game, although that too is open to conjecture.

Over in New Jersey, the state’s Division of Gaming Enforcement has revealed that state-licensed sportsbooks handled a little under $35 million in Super Bowl wagers. The figure disappointed a big group of onlookers who had expected the state to do much better than less than a quarter of Nevada’s handle.

Even more unfortunately for the Garden State, its books took yet another major hit by losing a whopping $4.6 million on the contest. With any luck, the thousands of punters who flocked to casino sportsbooks went on to lose much of that at the gaming tables to recuperate some of the losses!

Joe Asher, the CEO of William Hill US, noted to the Associated Press that his firm’s NJ sportsbooks enjoyed their best day since the newly legalized market launched in May last year, at least when it came to total betting handle. Asher claims that Hills’ statewide operations essentially broke even on the day in question, but that a record number of mobile account registrations accompanied this flat financial performance to even out the playing field.

NJ’s two biggest online wagering operators – DraftKings and FanDuel – both reported devastating seven-figure losses for the day. DraftKings seemingly booked a loss of around $1 million, while its largest competitor took a significantly heavier hit. It is important to note that a major part of that loss was incurred through free bet promotions. DraftKings also handled more than $300,000 mobile wagers on the day – just under FanDuel’s $350,000.

Over in Mississippi, the region’s commercial casino operation firms reported handle of $4.6 million – a resoundingly modest sum – on the 2019 Super Bowl. The nation is now waiting for Delaware, New Mexico, Rhode Island, West Virginia and Pennsylvania to come forward with their own figures.

See if YOU can win big betting online. Get GREAT ODDS when you wager at leading sportsbooks!