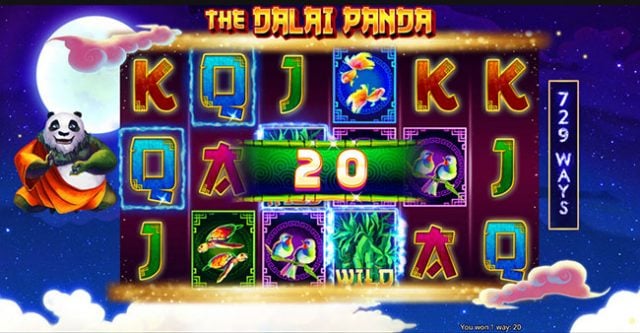 iSoftBet is an expert when it comes to the creation of uniquely themed online slots. The developer’s latest title, The Dalai Panda, is no exception, giving players a glimpse into the mystical world of one all-powerful panda as he teaches them how to harness their true inner winning potential.

The brand new game boasts a couple of innovative additions from its creator. First up is multi-reel play, not to mention central characters that captivatingly guide players along their journeys. The unique new title, as is revealed by its name, is centered on the wise Dalai Panda, who uses his magical powers to alter the reels if any larger wins are possible.

The result of this unique feature is that the slot contains an impressive 729 ways to win in total, adding extra oomph to your chances of winning big. The game consists of two separate reels that spin at the same time, essentially giving you twice as many chances to strike a juicy jackpot in one go!

Guidance From a Wise Panda

The central character to the plot is also a very helpful guide, offering you help and guidance as you progress through the game and regularly topping up the Free Spins Bank in the middle of the screen. The panda also awards a collection of bankroll-boosting features as you play, including Wild Reels, Win Multipliers, Extended Wins and Extra Wilds.

Additionally, if three or more bonus symbols strike the reels in tandem, the free spins feature will begin, causing the reels to fuse and form a massive, single reel with hundreds of ways to win attached. The Dalai Panda offers a medium to high volatility scale, and offers an RTP rate of 95.81% for traditional spins. Its hit rate stands at a solid 27.9%.

The new title from iSoftBet has also been engineered with mobile players in mind, and is thus compatible on all major smartphone and tablet brands and operating systems. With that said, desktop players are also able to join in the real money fun from any Windows, Mac or Linux PC.

In related news, the brand has also been shortlisted for the Game Developer of the Year award at this year’s edition of the SBC/Casino Beats Awards that will be held in London on December 4, 2018.

Commenting on the slot’s release, Michael Probert of iSoftBet has noted that The Dalai Panda is one of his company’s most innovative titles to date, offering a unique and enjoyable gaming experience. According to the CCO, by focusing the game on a wise but quirky character that actively guides players along their journey, the company is sure that it has created what will be one of its biggest hits to date.