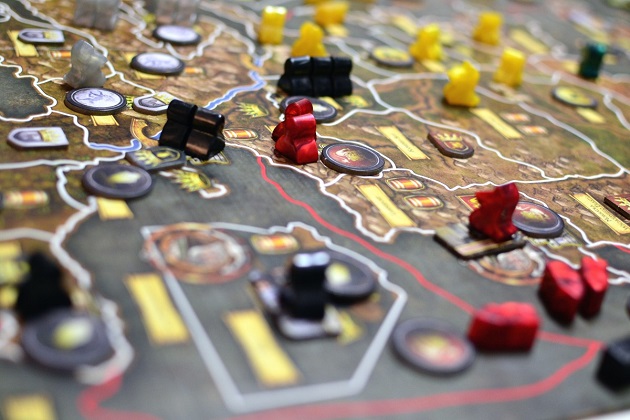 The falling leaves, the chill in the air and the shorter days are the perfect time to break out some hot tea and a great board game that can be enjoyed by everyone aged 10 and up. The Imperial Settlers is a brand new board game, published this year, 2014, by Portal Games. The game takes approximately an hour to play and can be enjoyed by 2 to 4 players.

Imperial Settlers Board Game focuses on Settlers from four major powers of the world who have discovered new lands, with new resources and opportunities. These settlers are Romans, Barbarians, Egyptians and Japanese and they move to their respective countries to expand the boundaries of their empires. They build new buildings to strengthen their economy, they found mines and fields to gather resources, and they build barracks and training grounds to train soldiers.

A common trend soon occurs, the settlers discover that this land is far too small for everybody and the war begins.

Imperial Settlers is a card game that lets player lead one of the four factions and build empires by placing buildings and then sending workers to those buildings to acquire new resources and abilities. The game is played over five rounds, every turn you will get one faction card from your deck and two common cards chosen from a pool of those available. In the second phase your buildings (locations) will produce: men, food, wood, stones, swords and golds. In the action phase you will use these resources to play cards (buildings) and/or activate cards.

Imperial Settlers is a 2-4 player, really engaging, multi-player solitaire. There are so many possible way to score and so many combinations that you can play it an endless number of times looking for the right combo or the winning strategy. You can dig your faction deck looking for special cards or you can just try to use common cards.Â  Raze or build? Build or deal?

Playing Imperial Settlers you are enchanted by the amount of little-big choices you have to take turn by turn. Iâ€™m sure you will need a lot of time to become confident with one of the empires and then you can try another one. The faction and common cards are designed in such a way that every game will play differently.

In two player games you can take time looking at your opponent empire but this is much more difficult with 3-4 players. There is not a strong player vs player interaction and it is not so easy to stop a well-built engine that has been designed by another player.

Even for players unfamiliar with tableau building games, learning Imperial Settlers should be an easy and rewarding experience

What do other players say about Imperial Settlers?

“This game has adorable art and components, which makes the interesting combination of card and resource management that much more enticing.” – weyrbrat

“It has that neat Farmville kind of feel though, because the artwork is very cutesy…” – newkillerstar27

“The artwork is a style I love (chubby toddlers on the Sumo card!), slightly reminiscent of Klemens Franz mixed with NES 8-bit RPG style.” – familygaming

GOOD: Balance of common cards and each player’s own faction cards allow for lots of replayability.

“[T]he Egyptians are about generating gold and turning that into points, the Japanese want to generate long term points and protect their buildings, the Barbarians want to pillage and destroy, and the Romans want to build.” – wesbaker

“The game feels like a sandbox experience, but it’s much more tactical than strategic since you’re not going to see anywhere near all the cards from game to game.” – newkillerstar27

“A lot of it actually depends on what common buildings come up, as they will be what guide you towards building your own faction’s buildings.” – newkillerstar27

GOOD: Combos are a big part of the game, and are both fairly easy and fun to do.

“…each deck has the cards necessary to combo into huge points.” – lotrfan1976

“The powers the cards give you are more euro-style than american: effects tend to be minor….[which] allow players to construct a lot of inter-locking half-engines to produce points, etc.” – familygaming

“Initially you are limited in doing much in your first couple of turns but the game ramps up really quickly and you start to produce lots of resources and are able to build a lot.” – Destrio

GOOD: Flexibility in how a card is used.

“Cards can be used for multiple purposes, except it will cost you different resources it is not as simple as just discarding a card for a specific effect.” – Papa Ninja

“Cards can have multiple uses between abilities, being razed for resources, being used as a negotiated production, etc. I generally enjoy card games where cards can be used in multiple ways and this didn’t disappoint.” – larryjrice

AMBIVALENCE: Player interactions comes through “razing” each others buildings.

“The mechanics are straightforward, and there’s just a bit of “take that,” without making being on the losing end of the affair too terribly punishing.” – Surge1000

“Fortunately, there’s not necessarily a lot of [razing] — the required swords are not so plentiful!” – snoozefest

“Don’t get too attached to your buildings. It’s just like history shows; build a civilization, expand it, and watch conflict and chaos ensue.” – Walt Mulder

BAD: Playtime/downtime is long with 4p; small card text can be exasperating with 4p.

“Imperial Settlers takes about 2 hours with 4 players. In that time I could get a full game of El Grande or something heavier.” – Skillet_135

“…the extremely tiny font used and the very small icons used. I feel like they wasted a ton of space on the card and could have doubled the font size to make it at least legible from across the table.” – pickboy87