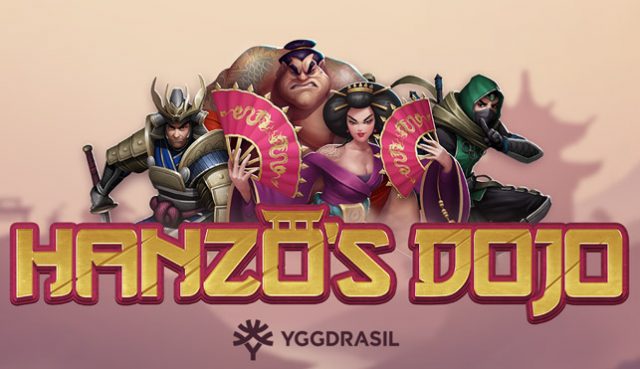 Hanzo’s Dojo is the unique title of Yggdrasil Gaming’s latest new video slot release. The exciting Japanese-themed title was launched to Yggdrasil’s casino partners on Thursday, 23 August, and boasts beautiful graphics paired with a handful of innovative bonus rounds to keep you playing for hours.

When it comes to theme, the new title has been based on the legend of Hattori Hanzō, a 16th century Japanese samurai. Yggdrasil has drawn its inspiration from the legend of old to create a slot that is also a training space for Canadian players to become the best old-school samurai warriors out there, all while enjoying big wins in the process.

The game’s training ground is nestled in a traditional Japanese building, complete with the quintessential cherry blossom tree in bloom. It is against this backdrop that five reels and three rows spin, along with a bonus level of another three symbols placed just below the roof.

The sumo wrestler, ninja, samurai and fan fighter symbols are the most lucrative in Hanzo’s Dojo, which can be matched across 25 fixed paylines. There is also a handsome maximum jackpot of 100,000 coins available to the luckiest of winners, although there are also many other ways to pad your bankroll in this desktop- and mobile-optimized title as well.

One of Hanzo’s Dojo’s most notable bonus features revolves around the miniature rooftop slot reel set, which contains three reels and just a single row of symbols. Kicking off with the Hanzo free spins round, these reels can choose any symbol at random to be locked over a 3×3 portion of the main reel set during the base game, which helps to add even more chances of winning big in the free games round. 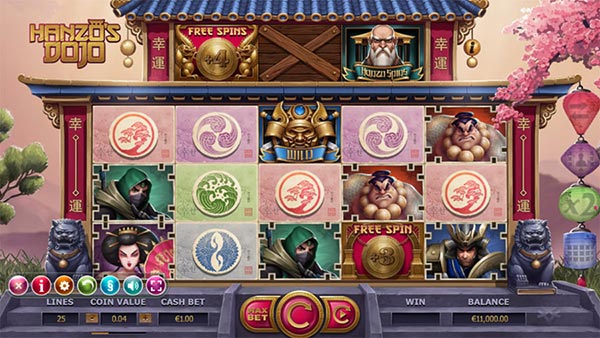 The game also boasts a standard free spins round that can be triggered with special bonus symbols from the main reels – but it is the Rooftop Slot that can activate extra bonuses as you play. These bonuses include additional free games, win multipliers, a wild reel bonus, win-both-ways play across all reels, and the chance to nudge the 3×3 frozen symbol set as needed.

With so many innovative bonuses and a uniquely engaging theme, Hanzo’s Dojo is certainly one of Yggdrasil’s most imaginative releases to date. The title is now available for real money play at all of the developer’s partner casinos, and, as mentioned above, has flawless compatibility with Android, iOS and Windows devices for samurai training on the go.