Heed the Call of the Valkyries In a New Slots Game

Premium iGaming software developer Playtech invites you to join a group of legendary Valkyries on their quest to travel to Valhalla and be rewarded with riches beyond your wildest dreams. The developer’s brand new slot focuses heavily on Norse mythology, and is based on the incredible journeys of three strong female warriors to assist the Vikings to enter Valhalla and enjoy the rewards they’ve earned in battle. Call of the Valkyries has now hit Playtech online casinos, boasting action across 5 reels, 3 rows, and 25 paylines. Players will be treated to a slew of thrilling bonus features, including scatters, wilds and three themed mini-games: Call of the Valkyries, March of the Valkyries, and Touch of the Valkyries. There is also a sumptuous top jackpot of 5,000 coins available to those lucky enough to land 5 wilds on a winning line.

The adventure takes place against a picturesque backdrop of Norse longboats and misty mountains, while a gorgeous stained glass window acts as a stacked wild on the reels. Other symbols include runes, shields, mjolnirs and other traditional Viking symbols, while a special bonus symbol activates the other bonus rounds for added winning potential. A Valkyrie wielding a spear acts as the bonus symbol, appearing only on reels 1, 3 and 5 during the base game. When 3 of these icons land in a single spin, the Call of the Valkyries feature will begin, offering you a classic ‘pick me’ round where you can collect instant cash wins and a 2x multiplier, should you advance through each level all the way to the gates of Valhalla.

The slot also boasts a March of the Valkyries feature, which will kick off when a stacked wild lands anywhere on reel 1, reel 5, or both. This feature awards you a series of re-spins with stacked wilds that move one reel to the right with every spin. Shield, ax and helmet symbols will also become frozen wilds when they meet the stacked wilds to further boost your pile of riches. Lastly, your winnings will also be doubled when two stacked wilds appear on the same reel! Last but not least is the Touch of the Valkyries feature, which is triggered randomly during the base game on any non-winning round. A lightning bolt will strike the reel set, converting one or more Warrior symbol into a wild and then re-evaluating your symbols for the potential to claim another mighty win. The new Call of the Valkyries online slot is now live at all Playtech casinos. It’s also fully optimized for desktops, tablets, and mobile devices to bring big wins to plunderers on the go. 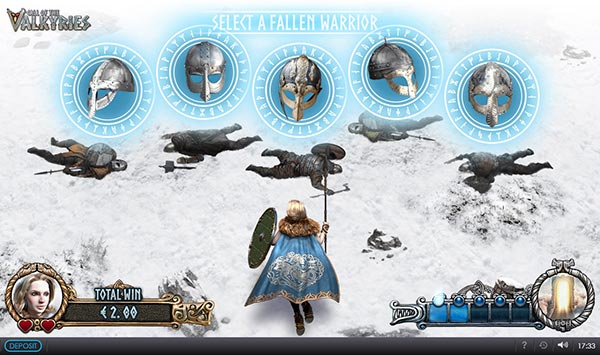