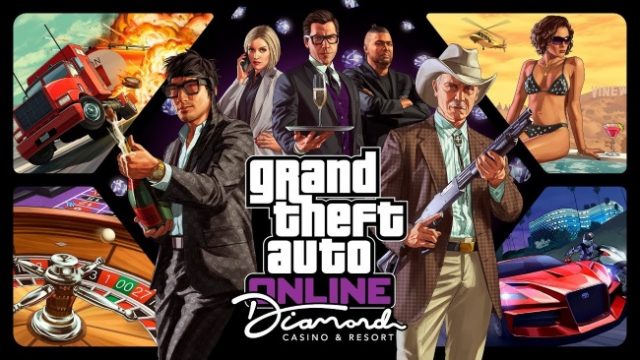 The Virtual Diamond Casino and Resort

The detailed Diamond Casino and Resort is set in GTA’s fictional state, San Andreas, which is loosely based on California. The idea for having this kind of establishment embedded in the game has been around for as long as GTA Online. Since the online game was first released, a sign on the property read “Opening Soon” – but players couldn’t enter.

In July, the tantalising mystery of what the casino and resort would be like was revealed. The Diamond is a fully functional establishment that allows players to indulge in and enjoy slot machines, Poker, Blackjack and other casino entertainment. At the same time, new missioned were added to the game as well as new cars and other items.

When developing and releasing the Diamond Resort and Casino offering, GTA publisher Rockstar Games adopted a conservative approach and took care to ensure that they were complying with all gambling regulations. Legislators were initially concerned that the Diamond would be operating as a true online casino, but players are not able to gamble with real money or cash out their in-game currency.

In addition, the feature is inaccessible in 50 different countries. This disappointed players around the world who had been looking forward to the in-game gambling establishment for years, but Rockstar Games wanted to be certain that they would not be at risk for any legal action.

Take Two Interactive, the parent company of Rockstar Games, published the latest financial results. The recurrent consumer spending metric is used to record the revenue that is generated by in-game purchases. As well as the highest recurrent spending by existing players, 2019’s Q2 also saw the biggest-ever acquisition of new online users.

Take Two Interactive Chief Executive Officer Strauss Zelnick expressed his company’s satisfaction with the rise in recurrent consumer spending as and the in-game casino in general. He explained that this was GTA Online’s largest-ever content launch, and that it set new records for daily, weekly and monthly engagement in July and again in August. As 2019 heads to its close, stakeholders are no doubt hoping that Q3 and Q4 perform as impressively as Q2 has done.