Games that Changed the Game

Examining the games that changed how we see, play, and interact with tech, and which not only inspired the developers operating today, but have stayed relevant is a fascinating pastime. It’s quite incredible to see how games have been hugely influential not only on the industry, but on popular culture, and how they have paved the way for franchises that have stood the test of time.

No matter where you looked in the 1980’s, be it an arcade, a bodega, a pizza shop, or even a Laundromat, there was almost definitely an upright Pac-Man game pulling in the crowds. Namco did not simply create a beloved video game; Pac-Man became a pop culture icon that transcended its genre, inspiring not only sequels, but clothing, books, and even a song! A testament to Pac-Man’s staying power is the fact that it is one of the very few games to have survived the video game crash of 1983, and has lived on to appear on almost every single system there is.

Tomb Raider is another classic that managed to make the leap to the world of online gaming. We’ve enjoyed Ms Croft for more than 20 years, in over 15 games, 2 movies (a reboot is in the works), an animation series, books, comic books, and even 2 video slots games. 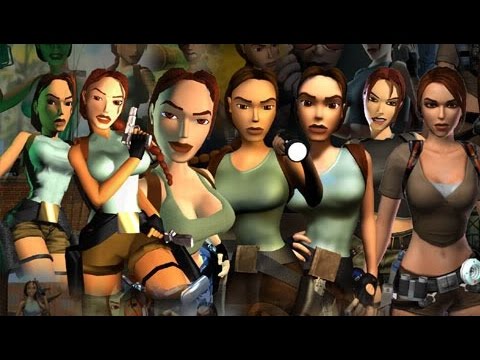 The evolution of Tomb Raider

Microgaming, one of the world’s top developers for real money casino games for a range of online casinos in Canada and the rest of the world, delivered the action, and saw some players boost their bankrolls significantly.

The first slot, Lara Croft: Tomb Raider, released in 2004, was hugely successful, and triggered a sequel in 2008. The games both have their own separate stories, taken from the video games that preceded them, which has resulted in their staying power – they are still being enjoyed online today. The second title, Tomb Raider: Secret of the Sword, sees Lara on a quest to gather a sword, and, as in the first, along the way she, and the player, discovers prizes, bonuses, and big wins. These slots are true crossover games, and combine a favorite video game character with gambling in all the right ways.

You would have to have been living under a rock, or born yesterday, if you don’t have some sort of experience with Super Mario Bros. This Nintendo classic was all the rage for a long time, and has recently enjoyed resurgence in popularity thanks to Super Mario Odyssey, which was released last year.

The impact that Super Mario Bros. had on the gaming industry can also be seen by the amount of clones it prompted. Shortly after the initial game was released a crop of cute cartoon mascots with attitude, think Sonic the Hedgehog, was suddenly available, all hoping to steal Mario’s thunder.

Only Sonic survived, since the copies couldn’t seem to deliver the right combination of great graphics, marvelous music, and gripping game play in the multi-level design that kept players hooked.

The Best is Yet to Come

If the kinds of changes that have occurred over the last years are any indication, it seems likely that gaming in 2025 will be almost unrecognizable to what we are enjoying today. Although Pac-Man, Tomb Raider, and Super Mario Bros. are all household names, we will have to wait and see if they are still as widely enjoyed in the future. The next chapter is unclear, which is half the fun!