Fight for Freedom with Just Cause 3 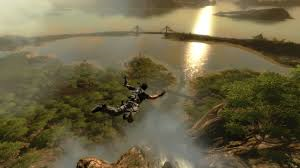 In the universe of open world video games, some games strive for a movie effect, making you feel like you’re the star of a motion picture you are creating as you play. For those types of games, realism is the key to success, and they often use live action actors to advance story lines to give the games that undeniable movie feel. But other games, like Just Cause 3, try for a different effect. Instead of absolute realism, they go for action-packed excitement that always has the look and feel of an advanced video game, not a movie. The movements are close to realistic, but you would never mistake the game for a film.

The star of Just Cause 3 – the character you control throughout the game – is a freedom fighter named Rico Rodriguez whose mission is to liberate his home country. The game is viewed from a third-person perspective. You always see Rico from a distance, not how the world looks through his eyes. That perspective makes Rico a classic-style video game character and the game’s setting a graphically-advanced fantasy world that imagines what an island in the Mediterranean might look like. You get 400 square miles to roam, and enough weapons to defeat a small army, which is essentially what you face.

Parachute or Fly in the Open Air

The missions you are asked to complete in the process of liberating your country offer the type of excitement that has made the previous two incarnations of the Just Cause series so popular. You have to fight off some serious armor at times. Liberating at country can be difficult, even when it’s just a games. But the real fun comes from the different tools you have at your disposal. There are lots of explosives, which are vital for the big takeovers, and those are certainly fun in an action movie fantasy sort of way. But the smaller tools you use to get around and to make smaller tasks easier are really at the heart of what makes Just Cause 3 so appealing.

A tool you’ll find yourself using often is the grappling hook, which can help you climb up mountains quicker than you thought possible, or to serve as a tripwire for armored vehicles or even helicopters. It’s great fun to swing around, and it’s easy to control in the current installment of Just Cause. Some games feature heroes with guns, some with swords. Just Cause 3 has a hero with a grappling hook. It’s a great effect and surprisingly versatile.

The other great tool at your disposal is something that comes very close to the ability to fly. Rico’s outfit comes equipped with something that looks like bat wings, and when he is soaring through the air and opens his arms, the wings let him glide through the air. It takes practice to learn to control the glide, but when you get it perfected, you can keep him floating for large distances. He also has a parachute, in case he gets wobbly. The wing suit and parachute can also be used together to cover even more ground.

When Rico isn’t busy using his prodigious amount of explosives to blast his way through a secure structure or to blow up bridges and other infrastructure, he’s often out in the open exploring the outskirts of the island. Some of the views he encounters are truly breathtaking. The outstanding graphic work goes a long way towards creating a convincing open world, and since there is so much area to cover, the attention to detail is striking as well. It makes it easier to suspend disbelief, and pushes the game a notch above being merely a video game, though not realistic enough, especially in the way Rico moves, to reach the level of movie realism.

So if you’ve ever wondered what it would be like to be a one-man army on a liberation mission, Just Cause 3 is the game for you. You can ride on the top of a jet liner and shooting rockets at builings. You can blow up cars, trucks, and even three-story buildings. And you can do it while propelling yourself through the air in a wing suit or swinging from tall buildings with your grappling hook. It’s the most fun you’ve going to have with your nearly unlimited supply of explosives. And the best part of all is that it’s for a just cause.

SHARE
Facebook
Twitter
Previous article The Challenge of Survival in The Long Dark
Next article Rainbow Six: Siege is Much More Than a Shooting Game
Related Articles