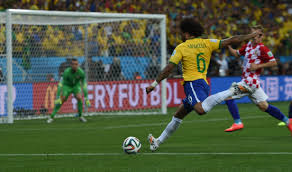 The international football association known as FIFA has been in news lately because of numerous arrests of top officials accused of corruption. But while the real FIFA organization reels, the soccer video game that bears its name is doing better than ever. This year’s edition, FIFA 16, features a female soccer player on the cover for the first time. And the Canadian edition has none other than national team standout Christine Sinclair, who joins international superstar Lionel Messi as the featured players of the game. But even the great Messi would have trouble matching up statistically with Sinclair, in both the number of goals scored and the number of appearances in international competition.

The game made news when the cover was released in early July as developers prepare for a September release of the game. Besides putting women on the cover – the American edition features 2012 Olympic gold medalist Alex Morgan – the game will also allow players to play as one of the women’s national teams from Canada, France, USA, and nine other countries. It’s hard to tell if that’s a change that came about because of a recognition of the high quality of play in women’s soccer, the rising popularity of the sport, or an increasing number of female players who would prefer to play women’s teams against one another. Most likely, all three reasons played a role in the decision.

More Realistic Likenesses Than Ever

If the FIFA 16 preview is a sufficient guide, the player likenesses have never been so realistic, and the movement style of the actual players is captured in the game like never before, making the playing experience feel more like a taste of high level soccer that you control. It also appears to make it easier to move as a team on offense and defense, which was something that felt more contrived in earlier versions of the games. The players on defense maintain tight defensive formations, keeping the pressure on the offensive player. The goalkeepers, however, still remain off-balance if a shot comes from a distance.

Player’s defense is particularly fluid, marking a change from last year’s FIFA 15, which put an emphasis on offense by endowing strikers with more speed and agility so that they could outperform most defenders. This year’s version of the game restores the balance to a reasonable degree, allowing defenders to compete against their offensive assignments. The improvement is a by-product of other improvements in the animation. The added movements that all players are able to execute are particularly helpful to defenders, who no longer simply lug themselves around the pitch. The added agility allows defenders to take bigger risks because their recovery time is shorter than in earlier versions of the game, so now if they commit to a tackle and fail, they can still stay in the play.

While the defense has certainly benefited from the upgrade in FIFA 16, the offense was not left out of the action either. The game features a new range of finishing moves that both make the offensive player more potent at the final point of a scoring drive and look amazing on the screen at the same time. The game also features a guide that gives you hints on the different types of plays the game allows for different situations, making it easier to pick up aspects of the game that enrich the experience but may otherwise never become part of a player’s repertoire.

The biggest innovation, however, is the introduction of women’s teams on the menu of options. While it doesn’t change anything about the way the game is played and simply adds options for video game players, the new development pays tribute to athletes like Sinclair, who’s contribution to Canada’s national teams has been second to none. The women’s teams only play against other women’s teams, but with a dozen to choose from, that rule is not much of a limitation. It’s also a tribute to the FIFA 16 developers that the women do not look like the men who play the game. Creators clearly invested time and effort in making the women look as realistic as the men.