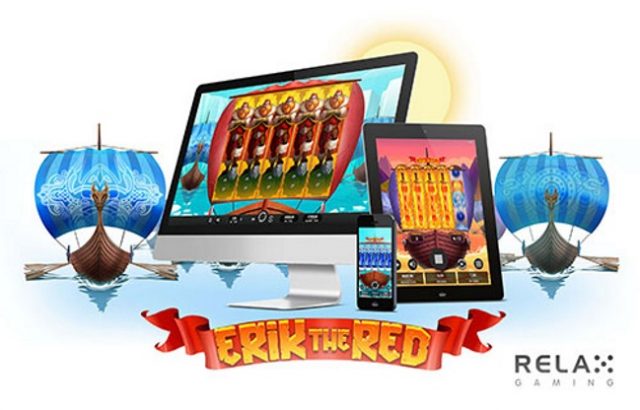 Indulge in a berserk Viking adventure with Relax Gaming’s latest online slots release: Erik the Red. The developer has set sail with the new game this month, which boasts a sea-faring journey based on the antics of a fiery-tempered, red bearded Norse warrior.

The innovative new title plays out over a 5×4 reel set, and sees Erik and his feisty wife Helga embarking on a mission to find sprawling new lands for their horde of Vikings. Players will help the pair to create their first settlement on the pristine shores of Greenland, while landing axes, helms and shields on the reels for astounding cash wins.

Mighty wins are waiting for you online! Get those reels spinning.

The screenplay of Erik the Red places a clear focus on engaging and intuitive winning potential. Random stacked wilds, stacked reels, and three unique scatter symbols will trigger a fun-filled free spins round, which packs in even more winning chances for players at Relax Casinos.

In terms of visuals, the title also sings with its bright colors, realistic 3D icons, and intriguing characters on the reels. The action takes place aboard a traditional longboat, with bright red sails and an accompanying fleet of plunderers adding an extra visual element to the mix.

Commenting on the new release, Relax Gaming’s Simon Hammon noted that the slot is the perfect title to spearhead the launch of his firm’s highly anticipated slots portfolio. He added that it features larger-than-life characters and adventures, along with game play that is both easy for newbies and engaging for seasoned players as well.

Hammon also noted that Relax’s commitment to innovation and quality is the core of how it creates its titles. With this in mind, the studio is proud to deliver on its potential as it introduces a thrilling approach to the video slot machine market.

A New Generation of Online Entertainment

The firm’s release of Erik the Red has closely followed its debut of Silver Bullet, its next-generation partnership program. The program has the goal of boosting the amount of quality gaming content available on its platform, which will no doubt come as exciting news to players in Canada and beyond!

Relax Gaming is seemingly working to brand itself as a new breed of iGaming software supplier, offering up fantastically unique content and its own proprietary slots as well. With more games soon to be rolled out as well, this move is complementary to Silver Bullet as well as the studio’s in-demand Bingo, Poker, and table gaming products.