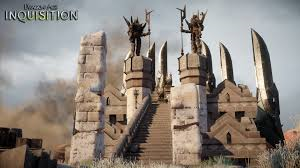 Some video game developers aim for graphics that are as realistic as possible. Sports games or games tied to movie franchises work hard to give players an experience that’s true to the subject matter. Some fighting games or shooters also go for the realistic graphics to give players the feeling that they are actually there, in the mean city streets or on the battlefield. But for players who want realistic graphics in the context of a fantasy adventure, Dragon’s Age: Inquisition may be the perfect combination The game is filled with extremely realistic looking people, along with some fantasy creatures and effects. The result is a feeling of having entered a fantasy world, and despite all of the realism, the first instinct is to feel a sense of escape from reality.

The fully-formed fantasy world setting is a major part of the appeal of the game. As soon as you enter, you’re plunged into a war-term region and your goal is to bring peace to the different factions. You also have to find a way to repair damage to the fabric of the world – a tear in the sky that is letting in demons that threaten your world. That, of course, requires defeating the sorcerer who opened the breach in the first place. The storytelling is another key element in the game. All of the action takes place in third person, so you are watching the character you control carry out the actions you command. That gives the game a movie-like feel and keeps the action fluid, even as you are pulling the strings behind the protagonist.

While Dragon’s Age is a leap forward in fantasy gaming because of the intricate graphics and smooth playing experience, the style of the game is classic role play. You get to choose the type of character you play, whether it is human or from another species such as a dwarf or an elf. You also get to choose the look of the character, the gender, and even the character’s primary skill set, whether it’s that of a warrior, a mage, or a rogue. That character serves as the protagonist of the mission, along with a group of companions. Together, the group navigates elements built into the story, some of which include the potential for romance between the characters, until the climatic battles are fought.

And as a form of escapist fun, Dragon’s Age certainly hits the spot, occupying that sweet spot so many video games aim for that combines the experience of watching a movie with the experience of playing a game and trying to win. It looks like a movie because the characters and settings are so realistic looking, virtually on a par with films of other fantasy adventures, and you’re watching the action take place with a level of detachment because of the third-person perspective. But the resolution at the end is far more satisfying than it would be in any film because it was your own ingenuity and skill that led to the final victory – if you manage to win.

An Ongoing Series with Easy Additions

Dragon’s Age: Inquisition is the third part of the Dragon’s Age series, and certainly not the last one. But the versatility of the software was demonstrated this month when a new addition was released that fits along with the game and serves as an epilogue to the story. The downloadable file extends the world incrementally and allows developers to create excitement for the next major installment by dropping in elements that will only be fully explored in the future. It also keeps the game in the news as game sites online review the new material. Since the main game was about saving the world, the new installment asks the philosophical question of what a world-savior does after the world has, ostensibly, been saved.

The whole package is another reminder not only of the technical sophistication of modern video games but also of their ability to offer an integrated experience that makes you think more about the human condition. The intricate story line is as much fun to follow as controlling the main character and carrying out the work that’s at the heart of the game. And that adds up to a perfect escapist experience that stimulates the imagination and leaves you feeling satisfied.