Dinosaur Games Are All the Rage 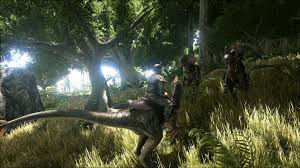 With the immense popularity of the new Jurassic Park movie, it’s not surprising that dinosaurs are having a real moment of fame in the larger culture. And one of the biggest beneficiaries of this sudden wave of popularity for the loveable but frightening beasts of pre-history has been the video game industry, especially the part that produces video games that feature dinosaurs. Although not a major branch of the gaming world, one game that’s really riding the wave is Ark: Survival Evolved, which just announced sales of over a million units since its release in June. Of course, the Jurassic Park franchise has long had games tied in with the blockbuster hit films, though oddly, they tend to go for a smaller scale of action.

Although not tied to the film franchise in any way, Ark seems to have a grip on the dinosaur video game market, at least in the first round. It could be the result of the timing – catching people just as their imaginations have been sparked by the film – and it could be because of the immensely delicate graphics and game play, which provide a bigger spectrum of options than the films themselves. Either way, Ark has earned its own moment in the sun, and deserves the attention it gains even if it’s hard to separate the game from the movie in the popular mind.

Survival in a Land of the Lost

There has always been a symbiotic link between the film industry and the gaming industry. Movies often inspire games, and even games like Tomb Raider started out as video games before being turned into major films. And with video games looking more and more like feature films these days, with graphics that rival anything that appears in the movies, it’s easy to see how one would easily inspire the other, in either direction. While Ark did not evolve directly out of the Jurassic Park series, it’s easy to see how the realistic dinosaurs of the first movie established the palate on which the game was built.

While dinosaurs roam the earth in Ark, the game is not focused entirely on battling the creatures. Or at least not entirely. The game is an MMO (Massive Multi-Player Online) game that lets players team up with others who are playing the game to achieve their goals. In this case, it’s just basic survival. Players have to create their camps and develop food sources while avoiding the dreaded dinosaurs that are thinking about their own survival and food sources. There are weapons to use against the hungry intruders, and there is strength in numbers. The beasts are truly fierce-looking, and the game features plenty of them stomping around to keep the action at a fever pitch through hours of play.

One of the Survivors

Like other MMO and games that rely on an enormous amount of video-like footage, Ark creates an entire world that is gripping visually and challenging on the gaming level. The game starts with a character on the beach, or one of hundreds of other places humans are being spawned, looking for shelter and sustenance. The game provides a map that helps players locate other humans to form tribes and other survival arrangements. There are materials to make tools, and ultimately weapons to battle the biggest threat to survival, the dinosaurs. Players gain skills over the course of the game, and even get to keep the skills if their characters die in the process, something that happens often.

There are valuable lessons to be learned from playing Ark about what’s really important when it comes to survival on an island when a person is on his or her own. The skills that characters develop increase their likelihood to survive. Of course, the dinosaurs add more than a challenge to the situation. They serve a visual and conceptual focal point, and raise the fun quotient of the game substantially. While it won’t make people believe they have transported into the world of the Jurassic Park movie, they will have a feel for the presence of dinosaurs, which is really what makes the movies so exciting in the first place.