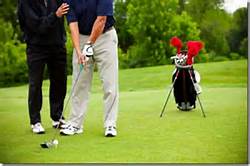 People who play golf often talk about the therapeutic effect of the game, how it feels to be in a large field of grass and hitting things with sticks and making them fly long distances. That, of course, is the civil version of the game, where people play by the rules and take advantage of the natural properties of the game to relieve a bit of the tension they feel in their lives.

But there is a less civil version of the game that exists mostly in people’s imagination – and in creative video games like Dangerous Golf. It consists of some of the same elements of the real golf. There are golf clubs and golf balls in the real thing and in the video game. But the similarities end there. The objective of Dangerous Golf is not to get the ball into a hole located far from the starting point. The goal is to play in small, enclosed areas – or even open and particularly volatile areas – and cause as much destruction as possible with the ball.

A golf ball, of course, is a small and hard objects that travels well through space when struck properly. And that’s the basis of the game. There are no limits to how much damage can be done, and high scores are accorded to damaging rooms of all sorts and leaving holes.

A Powder Keg with Sparks

As the level of destruction grows, the level of mayhem the golf ball can cause grows with it. One segment of the game, for example, involves teeing off at a gas station, and the ball has been doused in a liquid that effectively turns it into a fireball. The result, naturally, is that the entire gas station eventually goes up in flames. And a gas station on fire is a very dangerous thing.

In essence, however, Dangerous Golf is actually a truly cathartic version of miniature golf. There is a hole that the player is aiming to hit the ball into, and points are deducted for going too far over par. But unlike other versions of miniature golf for the computer, the obstacles that stand between the player and the hole are meant to be broken down, not bypassed. Special shots that bring about the most destruction with the greatest aggression are rewarded with the most points.

Dangerous Golf actually has more in common with some online casino games than with more traditional versions of miniature golf. There are slots games that have a similar level of whimsy about them. But few would ever attempt to showcase the same level of violence, even as that violence is directed at objects, not people.

It’s all about the destruction. When a player breaks enough objects to qualify for the next level, he or she gets a final bit of super-destruction – the flaming ball that is easier to navigate than a regular golf ball. In fact, one of the challenges to the game is that the bounce of the regular ball is consistent with what it would be in real life. That makes it surprisingly hard to control, as it bounces of walls or at other objects. But controlling the ball is not as important, overall, to hit it hard at things in the way. That’s what makes the game so much fun.

There are 100 levels available, and some even focus on traditional skills like putting to get the ball in the hole and move on to other levels. The destruction-less levels only highlight the absurdity of the other levels where things are breaking apart everywhere. But the gleeful destruction is not only fun but also therapeutic in a way real golf players talk about a day at the links.

Someone who is looking to improve his or her golf form is probably not the main target for the game. Points are awarded for taking a difficult path to the hole, one that involves moving things away that might be blocking the path. It’s almost the opposite to the ethos of real golf. It’s mad fun, and it can make you feel a whole lot better in a very short time.