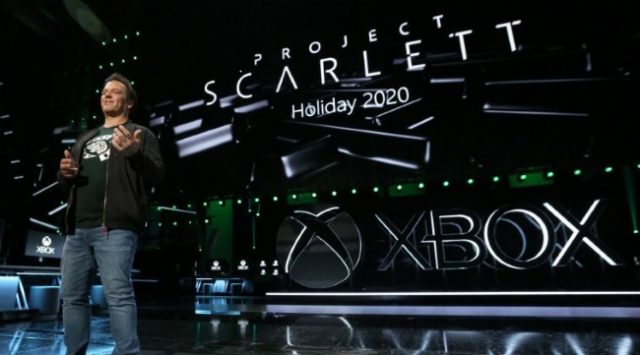 When talking Project Scarlett with Microsoft, one cannot help but get the feeling that to the tech-giant, the future is always “tomorrow” regardless of time ticking away, because every in-depth question posed about the new Xbox is met by a steely resolve not to reveal much and a single standard response, “at a future date we can give more details about Scarlett”. It seems that no matter how much and how hard we push, the tech-corp isn’t going to reveal much more than what was unveiled at E3 2019. Which really wasn’t actually anything at all.

The fact that much of the hype around Microsoft’s appearance at this year’s expo revolved around Project Scarlett doesn’t seem to phase the company all that much. And really, who knows what the meaning of it all actually is. Are they trying to create a mystery that will continue to draw us closer; speculating and musing away at the endless possibilities? Or is Microsoft still secretly trying to figure it all out for themselves?

At least there appears to be a single beacon of hope as far as surety goes, and that is that those players not quite ready to go all-in on the information super-highway constant connectivity and streaming way of doing things, will still be able play their games off-line. How exactly this will translate into the actual tech remains to be seen.

At this stage, we’re not even clear on whether the new Xbox will consist of a single console or of two separate units. Some seem to think that this is exactly where the “to connect or not to connect” conundrum will lay its weary head, with one console designed for off-line games and the other for navigating the ether. And even so, it’s all hearsay yet.

Aims and Intentions Expanded Upon

All indications are that the actual hardware is what Microsoft has been focusing on. And alongside the hardware, the actual capabilities. The corporation’s Corporate VP of Gaming Engineering, Liz Hamren, was at least willing to reveal some of what had gone into Scarlett in terms of what Microsoft wanted to achieve with the new release. A lot of what the corporation hopes to achieve is directly connected to the notion of the hardware being able to support the means. Better hardware, said Hamren, is the makings of a console able to support better games. Also, said the VP, it’s the makings of a better experience for the developers of games.

Perhaps there is no need then to be reading quite as much into the perceived secrecy, and perhaps Microsoft wants nothing more than to keep as many people as happy as possible. Isn’t that after all, what sound business is all about?