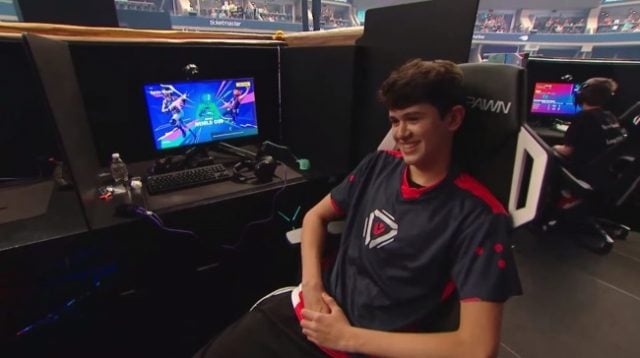 North American Fortnite champion Kyle “Bhuga” Giersdorf may only be 16 years old, but he is now a wealthy 16-year-old thanks to his having won the Fortnite World Cup Solo Finals and $3 million in prize money.

The competition action got underway at 1 p.m. in the afternoon at New York’s Arthur Ashe Stadium and it wasn’t long for the wear before Bhuga’s out the blocks aggressive style of play positioned him firmly in the lead. He continued in like fashion all throughout and by the time Game 6 had rolled around, Giersdorf enjoyed a 15 point lead on the back of a stellar 18 eliminations.

The competition is points-based and not at all different from Fortnite’s everyday game platform. Bhuga won the 1st place prize money thanks to his having finished with a leading 59 points. Bhuga’s prowess is clear from the fact that the runner-up, namely NA East player “Psalm”, managed to accumulate 33 points for the $1,8 million in second place prize money. That makes for an 18-point lead on the part of Kyle Giersdorf.

Lately there has been much going on in the way of speculations with regards to whether Fortnite was actually capable of standing the test of time. The game has been slammed by many a public figure about its tendency to literally eat into daily life in the way of time and attention, including Prince Harry.

Prince Harry not too long took to social media to vent about his absolute dislike of the game. The royal did ad that it did not have as much to do with any particular content associated with Fortnite itself, but instead, with the game’s tendency to fully absorb the attention of its players.

But then again, how good can any game be if it fails to hold the attention of its players?

And then of course, not too long ago, Fortnite became the focus of the gaming community yet again when software giant Microsoft blamed the Epic smash hit for a decline in sales revenue. Microsoft owns the rights the distribution of Fortnite Battle Royale for Xbox and recently lamented the fact that sales aren’t what they used to be.

So much so that Microsoft appeared ready to close the book on Fortnite for Xbox, and choosing to focus on cloud-based and subscription streaming services instead.

For the moment however, Fortnite seems to be doing just fine. And if anyone is enjoying a Fortnite moment in the sun, then it’s Kyle “Bhuga” Giersdorf.