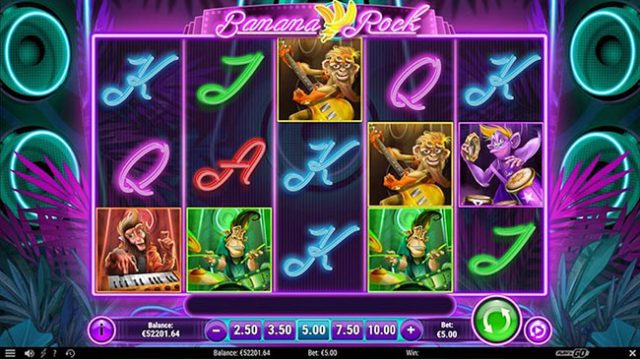 Online casino gaming enthusiasts now have yet another brand new title to look forward to from the expert developers at Play ‘n GO. The software creator’s latest release is a slot by the name of Banana Rock – a fun-filled, neon titled based on the fictional rock band of the very same name.

This particular band consists of a troop of monkeys in crazy neon garb, colorful bow-ties, smashing sunglasses, and some of the most awesome hairdos you’ll ever see an ape sporting! These simians absolutely love to charm you with their punchy rock tunes, and their frontman Simeon Chimpsky is right at the head of the pack to keep you entertained around every corner.

Banana Rock is back once more for a last, action-packed stage appearance, distributing brilliant wins and bonus features that will have you going… well, bananas! If the apes manage to reach their final encore during your gaming session, then you’ll also be guaranteed a sensational cash prize to sweeten the deal even more.

The new online slot also boasts some of Play ‘n GO’s most iconic special features for added entertainment. Their classic Win Spin mechanic is included in Banana Rock, guaranteeing you a win once your spin is over. The feature has been incredibly successful in the company’s other titles, including fan favorites like Royal Masquerade and Pimped.

Commenting on the release, CEO Johan Törnqvist warned players to look forward to an interesting theme backed with top quality gameplay and a troop of terrific performers that are sure to keep you coming back for more. In the new title, the CEO said, you can expect extra spins, re-spins and a number of other innovative bonus rounds, adding oomph to your bankroll via all desktop and mobile channels.

The Rock ‘n’ Roll re-spin feature, he said, is an epic addition to the title, offering punters even more chances to spin and win while they enjoy everything it has to offer. Whenever you earn two or more Rock ‘n’ Rollin’ wilds, he added, they will award one re-spin while sticking in place to help create even more juicy winning combos.

The fresh and funky new slot has also debuted at the same time as Play ‘n GO has announced a new partnership deal with Danish casino operator RoyalCasino.dk. The new business relationship will help the software developer in its quest to continue to expand its presence within regulated iGaming markets, including Denmark’s thriving industry.

Get those reels rolling when you play online.
Discover the HOTTEST slots now!