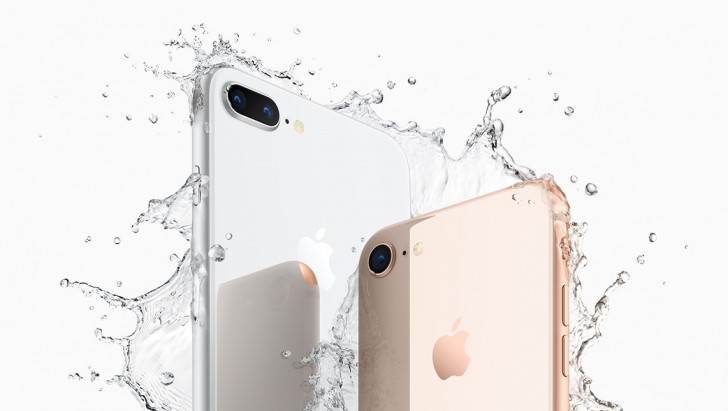 iPhone 8 introduces an all‑new glass design. The world’s most popular camera, now even better. The smartest, most powerful chip ever in a smartphone. Wireless charging that’s truly effortless. And augmented reality experiences never before possible. iPhone 8. A new generation of iPhone.

The iPhone 8 is entirely formed from glass, front and back. Crazy idea considering how many of us have experienced a smashed screen and then paid the extortionate price for a repair? But, alas this is the most durable glass ever in a smart phone say Apple. Yeah, we will have to see it to believe it. Another benefit of this glass phone is that it is water and dust resistant. The phone comes as a 4.7inch and 5.5-inch with retina HD display.

Moving onto the camera which for some people is probably the most used feature of their phone, Apple claims their camera is the world’s most popular camera and to be honest they are probably right but, is it the best camera? The new iPhone 8 features a more advanced 12 mega pixel camera, a new colour filter and optical image stabilization. The CPU is powered by the most powerful chip yet an A11 Bionic that makes use of four efficiency cores that are 70% faster than the A10 Fusion plus two performance cores that are up to 25% faster. The iPhone 8 also makes use of wireless charging meaning not having to replace your charging cable every six months.

Then we get the iPhone X

What is the main feature of this new smart phone? The fact that it is entirely a screen… Mmmmm okay, Apple you really pushed boundaries with this on (in case you didn’t know that was dripping in sarcasm).

Our vision has always been to create an iPhone that is entirely screen. One so immersive the device itself disappears into the experience. And so intelligent it can respond to a tap, your voice and even a glance. With iPhone X, that vision is now a reality. Say hello to the future.

The iPhone X is an all-new 5.8-inch super retina screen that works all the way to the rounded corners thanks to new techniques and technology. The screen is OLED and uses a 1,000,000 to 1 contrast ratio. Like the iPhone 8 the X is also entirely glass – yip that same durable glass (notice how they don’t say unbreakable) that is water and dust resistance (pity not crack resistant). This phone also differs from the standard iPhone as it does not have a home button but rather, a feature called intuitive gestures.

Familiar gestures make navigation natural and intuitive. Instead of pressing a button, a single swipe takes you home from anywhere.

What also makes this phone unique is the face ID feature housed at the top of the phone alongside the camera. You can now use your face as your password for unlocking your phone and authenticating payments. Moving across to Animoji something that we are sure will be popular with teens and hipsters. The true depth camera can analyze over 50 facial muscles that you can mirror your expressions into emoji meaning now you can turn the pig, panda or cat into yourself. The Camera features are pretty similar to the iPhone 8 and the X also makes use of A11 Bionic technology. In terms of power efficiency, the iPhone X is expected to last 2 hours longer than the iPhone7.

The iPhone 8 will be on offer for pre-order from 15 September and should be released on September 22 in Canada. The cost for a 65GB iPhone X is expected to be around $930 CAD. While an iPhone X will set you back around $1,320 CAD – the official release dates have not been released yet but you should be able to get an iPhone X from around October.