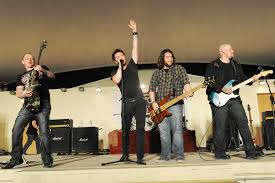 People go to land-based casinos for a wide variety of reasons, ranging from the gambling entertainment offered to restaurant options — often some of the top dining options in the city — to the casino promotions which create a more welcoming atmosphere for beginning and veteran players alike.

Many of the top casinos also feature an entertainment center where top performers play music and present other types of shows for viewer enjoyment. Even people who aren’t particularly interested in playing casino games may enjoy a night out at these entertainment venues. The shows rotate, so there’s always something for any taste and interest.

The casinos open their performances to all visitors, regardless of whether they come to gamble, dine or simply enjoy the show.

Some of the upcoming performances in Canadian casinos include:

Casino Nova Scotia, located in Halifax, is known for its range of performances, with genres that span jazz and country music to classical and rock. This spring the casino will be hosting Abbamania, a pop rock musical that takes viewers back to the disco era when the Swedish band ABBA commanded the charts. Together with ABBAmania the casino presents Night Fever, a tribute to the Bee Gees with Bee Gee Hits that include Night Fever", "How Deep is Your Love", "You Should Be Dancing", and "Staying Alive". In April the Ha!ifax ComedyFest will be featuring some of North America’s biggest comedy stars including Godfrey, Cathy Jones, Bob Marley and Rich Hall. On May 6th Bruce Guthro will be at the Casino Nova Scotia with his Songwriters’ Circle with great music and stories. The Circle features local, Canadian and international artists as they share their stories and the inspirations behind their lyrics and music.

The Casino Nova Scotia features over 500 slot machines as well as table games of blackjack, poker, craps, roulette and baccarat.

The Palace Casino of Edmonton serves as an entertainment center for the south-central Alberta region. The WOW (We're One World) band is a top 40 Variety Show Band with a repertoire that includes all genres and styles, ranging from the Classic Oldies up to today's current hits, will appear at the center on March 25th.

Just outside of Edmonton, at the River Cree Casino, the spring line-up of performers is exciting casino-goers. Bill Engvall, winner of the “Best Male Stand-Up Comedian” American Comedy Award will be performing on March 25th and the Australian Bee Gees will take to the stage on March 26th in a tribute to the classic Bee Gee sound. The show includes state-of-the-art sound, video clips, graphics and superb entertainment as Bee Gees music is presented from a contemporary perspective.

ZZ Top (That Little Ol’ Band from Texas” arrives at the casino on April 1st, bringing rock and a bit of country music to Edmonton. Then, on April 2nd, Rodney Carrington bring is unique blend of music, comedy and acting to the casino entertainment center.

Casino Rama, one of Canada’s largest casinos, located in Orillia Ontario just north of Toronto, has an extensive line-up of performers for the spring and summer 2016. The casino’s schedule includes performances from a wide variety of musical and comedy genres so there’s always something for everyone. Some of the upcoming performances include ZZ Top on March 24th, Brit Floyd on March 26th, The Cult on March 31st, Colin James on April 1st, Bill Burr on April 2nd, Diana Ross on April 7th, Steve Martin and Martin Short Comedy on April 9th, Marisa Laurito Piero Mazzocchetti Charlie Cannon on April 10th, Terri Clark on April 15th, Rodney Carrington on April 16th, Santana on April 23rd, Ron James on April 23rd, Nancy Sit & Henry Lo on April 24th, and Foreigner on April 29th and April 30th.

Another of Ontario’s world-class casinos is located in Windsor Canada, just across the border from Detroit, Caesar’s Casino. Caesars maintains a line-up of world-class stars and this spring is no exception. Paul Zerdin will be performing his winning combination lf hilarious ventriloquism, comic timing and technical skill on Saturday March 26th. Zerdin is known for bringing puppet characters to life including Baby, senior citizen Albert, and Sam the teenager. The legendary Foreigner will be performing on April 7th and comedian Ron James brings his Pedal to the Metal tour to the Caesars Colosseum on April 15th. To close out April in style Santana, the fabulous guitarist, will perform Latin American Music including his greatest hits that include "Evil Ways", "Oye Como Va", and "Black Magic Woman".

One of Vancouver’s largest casino venues is the Hard Rock Casino which provides Vancouver music enthusiasts with a varied selection of the best in live performances.

Vancouver casino patrons and other visitors can buy tickets to any of the spring Vancouver performances which include the A-Town ISHQ South Asian Music Concert on March 24th, Pop Junkies with their repertoire of pop, rock and country music on March 25th, local Vancouver musician Rachael Chantoor on March 25th and lyricist/songwriter/singer Cole Petrone on March 26th. The Pop Junkies returns to the Hard Rock Casino on March 26th.

At the Edgewater casino in downtown Vancouver, the Zimmerman with Jim Byrnes will be performing at the Blues Concert on March 26th. Tickets are $10 and a food voucher is included as part of the ticket price.

Just outside of Vancouver at the River Rock Casino guests can attend shows at the River Rock Show Theatre with upcoming events that include the China Oriental Song and Dance Troup “National Beauty” on March 27th, the Nylons Farewell tour on April 7th and the Vancity Comedy Extravaganza on April 30th.

You can look forward to a fun-filled and entertaining spring when you attend performances at any of the Canadian casinos.