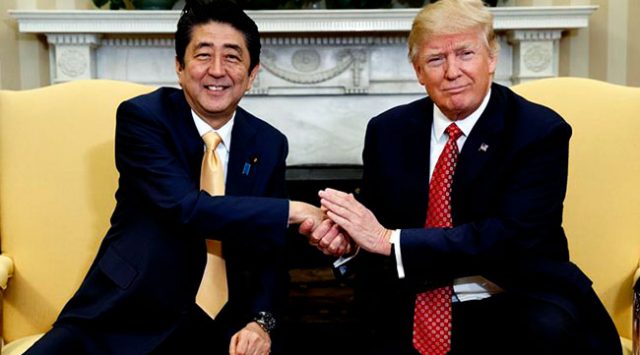 President Donald Trump is now in the midst of yet another controversy. Reports have poured in about his attempts to persuade Japan’s prime minister to choose US casino tycoon Sheldon Adelson as the winning bidder in the Asian nation’s current casino license race.

Trump has used his political connections to advance Las Vegas kingpin Adelson’s personal interests and help him to win one of a few precious available licenses in the newly regulated Japanese gambling market.

Adelson is the chairman, founder and CEO of Vegas gaming and hospitality firm Las Vegas Sands. The company operates integrated resorts in Sin City, Macau and Singapore, and is one of a slew of major casino firms that are vying to claim one of the three gambling licenses that Japan will issue as part of its bid to expand casino gaming in the nation.

The aforementioned Las Vegas Sands behemoth and a group of exclusive US CEOs attended a breakfast in Washington with Shinzo Abe, the Prime Minister of Japan, in February of 2017. Japan’s leading official was visiting the newly elected president of the US, Donald Trump, at the time.

It is also important to note that he and his wife, Miriam, were among the largest donors of Trump’s presidential campaign the year before, sending checks worth $20 million to support the then-businessman and casino owner’s plans. Adelson and the other executives that attended the breakfast with Abe apparently raised the casino topic with the politician – and it has been reported that this was not the last time during the PM’s American trip that the issue was discussed.

According to ProPublica, Trump himself also discussed the topic with Abe during a meeting at his Mar-a-Lago Resort in the Florida area of Palm Beach. Two insiders of the meeting told the newsroom that the US president talked to Abe about Adelson’s casino bid, trying to persuade him to grant Las Vegas Sands one of the few licenses on offer.

The Japanese official was seemingly surprised by the course that this conversation followed. One person briefed on the meeting told ProPublica that the matter was raised ‘out of the blue’, noting that Trump told Abe that he should really consider Las Vegas Sands’ application for a license. The PM simply thanked Trump in response, according to insider accounts.

Trump also reportedly mentioned one other major gaming corporation, although accounts differ on whether it was MGM Resorts or Wynn Resorts that was mentioned. Either way, the US president’s attempts to advance the personal interests of one of his major donors was a full transgression of political protocol, indicating very clearly the influence that Adelson has in the White House and beyond.

Spin and WIN when you play slots online!