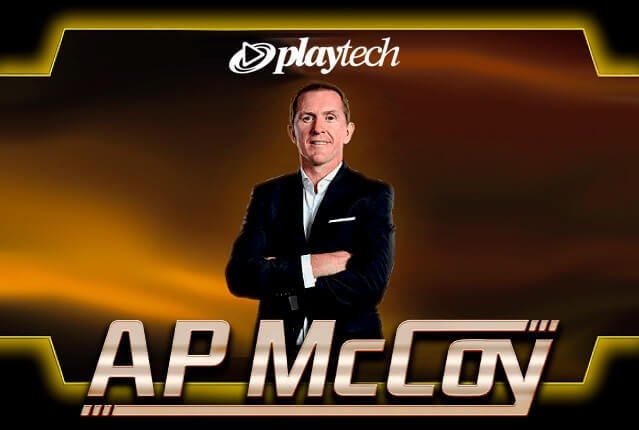 Playtech’s Sporting Legends series has just welcomed a new celebrity sports star to the fold. The developer has announced that the newest addition to the branded product is none other than horse racing legend AP McCoy.

Exciting as what the life and times of McCoy tend to be, and even more so now that it’s ready to be enjoyed in slot format, it’s not the only highlight of the new game. For the first time ever since its development, Playtech has decided to incorporate its new Playtech Power Play product. The product comes complete with an enhanced spin option and this serves to boost wins and overall performance on the slot’s reels.

Minor Changes For The Better

The jackpots have remained similar to those offered by the other games in the series. Daily, Weekly and Mega Jackpots are still up for grabs. Two separate modes of play have however been incorporated, namely the Accumulator mode and the Accumulator Plus mode. These function very much in the same way as would a progressive jackpot, the only difference being that that every time a win is registered in any of the five-game bundles, the prize pot increases.

The Wheel of Fortune bonus round is where the slot’s brand power really stands out. In addition to the bonus round offering many new ways in which to win, none other than AP McCoy himself hosts the feature in true game show style. Another first for the sports-celeb-based series.

When considering where the developer finds itself to be in the present, compared to the state of its finances a little less than a year ago, it’s been an amazing, if not miraculous transformation and turn-around. The current state of business is worlds away from what it was a year ago and it certainly seems as if it’s business as usual after last year’s ructions particularly in Asian markets.

New and troubling developments in Asia and especially China, made all the worse by Trump’s trade war with the economic superpower, had at the time prompted the company to issue a slow-down warning to its investors. To add insult to injury, the London-listed gaming giant was forced to look on as the price of its shares fell to an all-time low of £5.52 ($7.24) per share. This constituted a 27% drop in value and the lowest that a single Playtech share has ever traded at on the London Stock Exchange, since the company first opened its doors for business.

But all is well that ends well, and it certainly appears as if everything is back to normal for the most part.

Huge jackpots are waiting for YOU online. Play high profile slots to WIN!