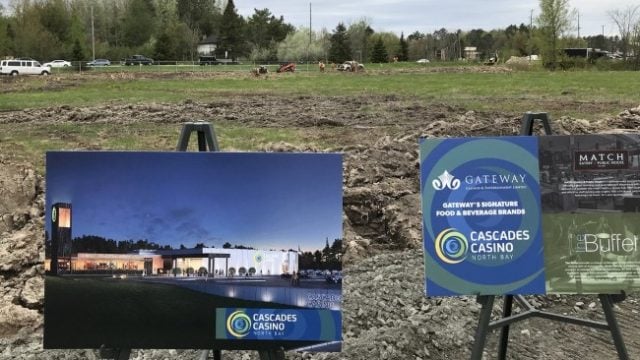 It’s official. Construction of North Bay’s Gateway Casinos & Entertainment Cascades North Bay Casino is finally underway. The official ground-breaking ceremony took place on the last day of May, with most of the conversationalists of the last couple of months present, including North mayor Al McDonald and a group representing the smiling turtles of North Bay; official name Blanding’s Turtle.

A conservation storm has been raging around the heads of all and sundry involved with the construction of the casino as the site where the casino is being erected, also happens to be the home of the endangered species of turtles. The site is a very delicate wetlands complex and it’s the typical nesting location for the turtles.

Many are of the opinion that not enough was done to protect the plight of the turtles throughout the pre-construction process, but the truth of the matter is, not much more could have been done. The operator and even the town’s administration did not appear to be willing to budge in as far as what location was concerned. The fact that the $31 million casino development is expected to create at least 200 jobs was used; and is still now being used; as a crutch in support of the development going ahead as planned.

But those who speak on behalf of the turtles, an organisation called Stop the Casino, Save the Turtle, say that its absolutely ludicrous that the operator went ahead with its plans to develop the casino smack-bang in the centre of the watershed area for Lake Nipissing. Activists are of the opinion that the town’s administration has put the interests of the developer on the priority list above those of the rest of the community and also of the local animal-life.

So brazen had the city been about its resolve to allow the development to go ahead as planned, that council member Mark King had at one point deemed it necessary to table a motion of reconsideration. According to King, it had been a shocking affair to see the city go from zero to 100 in what was practically a single smooth move.

Now that the ground for construction has officially been broken one cannot help but wonder what will become of the smiling turtle. Will it survive the development? Will the operator even be in a position to limit the damages that construction will have on the region? Only time will tell.

Play and WIN online. Canada’s top rated casinos are ready to welcome YOU!