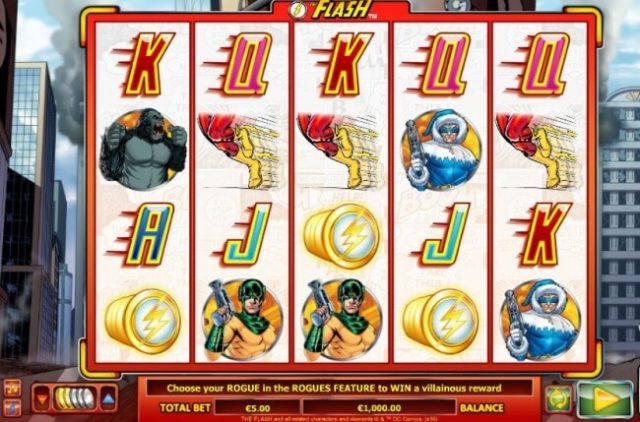 DC Comics. Don’t you just love them? If you do, then just like us, you’ll be very happy to hear that that Playtech has taken up the challenge of bringing none other than The Flash to life in a brand new online video slot. Just like in the comics, Flash’s main mission is to take down his arch nemesis, Reverse Flash.

A 5×3 grid sets the scene and 50 paylines are where the action is at. And if action is what you’re after, The Flash will most definitely not disappoint. The slot’s pace is much faster than typical games and it’s obvious that Playtech wanted to zoom in on even the smallest details in order to create a believable playing field for DC Comics fans. Needless to say, one does not have to be a DC-expert to enjoy the game, and even if you’ve never seen or read a comic ever before, you’ll still enjoy the slot thanks to its many special features and exciting mechanics.

Wilds, scatters and a free spins bonus round all contribute to the slot’s success and the fact that no fewer than 4 progressive jackpots have been thrown into the mix for good measure, ensures that The Flash is a thousand hoots a minute. The top jackpot is worth an astonishing 20,000 coins.

The Flash’s paylines are fixed at 50, but versatile betting options ensure that everyone can afford to have a go at spinning the reels. The game presents a fairly reasonable 96.14 RTP percentage, which is not bad going for a slot featuring more than one progressive jackpot.

Fans of Playtech and fans of comics will remember that not too long ago, the developer wowed us with Suicide Squad, yet another title based on a DC Comics creation. The Suicide Squad is a group of extreme misfits who have been thrown in jail for a number of not-your-typical series of crimes, and now are engaged in various missions, hoping to have their prison sentences blotted out.

Harley Quin, the Joker, Deadshot, Katana and El Diablo were all there and fans agreed that it was just about the best rendition of the beloved misfits that they had ever experienced. Playtech are true artists when it comes to building a game on an existing brand; this was true for Suicide Squad and we expect that it will remain true for The Flash too.

Play for the BIGGEST JACKPOTS online. Get those slots reels spinning!