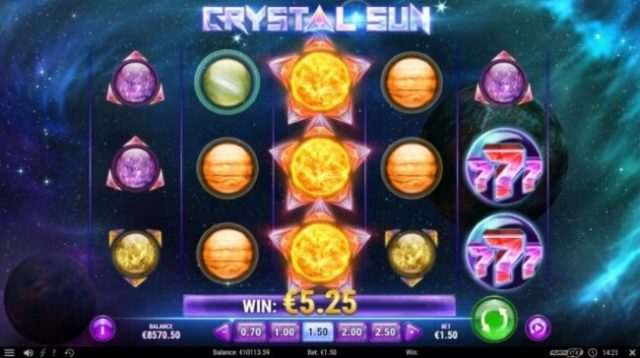 Play’n GO has just released a brand new slot game and one simply cannot help but wonder whether Crystal Sun is the developer’s version of a re-work of its retracted Starblast, especially since both games were at some point described as being “out of this world”. It wasn’t too long ago that the developer was reprimanded by NetEnt following the release of Starblast; with the latter having claimed that Starblast was just a little bit too similar to its own Starburst slot, for comfort.

At the time of NetEnt having threatened Play’n GO with the necessary legal action if it were to refuse to pull the game, the former said that it wished to impress upon the industry the fact that it was nothing personal; NetEnt was merely trying to protect the rights to its ideas and products.

Striking Similarities, But In A Good Way

With that having been said, Starblast had been surfing the ether for a couple of days before NetEnt blew the death-whistle. During this time, we managed to get a proper look at it. The new Crystal Sun does bear a few striking resemblances to the slot that was kicked to the curb, but at least its managed to veer further away from NetEnt’s original creation and idea.

A definite highlight of the new game is the fact that there’s a massive 4,000x jackpot bet multiplier up for grabs. There are also wilds, stacked wilds and special re-spins. Crystal Sun is fully compatible with all major operating systems, including those found on mobile devices. All in all, it appears to be a well-developed game, whether or not the idea was to re-invent the cancelled Starblast, or not. It’s still fun to play by any standard.

Original Ideas Are The Best

Play’n GO’s recent release of another new game caused quite the stir too, but that time round, thankfully for more honourable reasons. The recent release of the developer’s new Cash Vandal slot has been hailed as one of the most detailed slots developed by Play’n GO to date. It’s a real celebration of the history of European street art, and players have the opportunity to step into the shoes of travellers walking the high streets of London, Paris and Berlin; three of Europe’s oldest and most magnificent cities.

Hopefully in future we’ll see many more Crystal Suns and Cash Vandals from where those had come from.

Get those reels rolling and cash in on BIG JACKPOT WINS! Play slots online.