New Liberal Government in Canada. What does it Mean to the Gaming Industry? 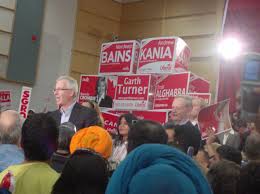 Last week the Liberal party achieved a significant upset victory in Canada, rising to the position as Canada’s majority party. Big changes are in store for Canada and, as part of the process, I wondered about how the new Liberal party will relate to the gambling industry.

The National Liberal Party doesn’t seem, as far as I can see, to have formed any positions regarding gambling laws or expansion in Canada. However, if the experiences individual provinces are any indication, the gambling industry is in for a period of prosperity under the new Liberal government.

Dalton McGuinty, premier of Ontario and head of that province’s Liberal party, has been relatively consistent in promoting the opening of more casinos and expanding the lottery in Ontario.

McGuinty is not what one might term a “proponent” of gambling in Ontario — he once admitted that he was “not attracted” to the idea of opening more Ontario casinos. However, he and his party have supported the gambling industry in the province and are supporting the opening of new casinos and the expansion of existing venues. The Liberals have also encouraged the Ontario Lottery and Gaming Corporation as they move into the online gambling market. This expansion includes selling lottery tickets online, expanding sports betting and offering online real money games.

Over the years Ontario politicians have waffled back and forth regarding state-run gambling. Today however, the Ontario Liberals are fairly united on the issue. They believe that, since the province is already involved in the gambling business, it might as well use the activity to its advantage.

Tim Hudak, leader of the Ontario Progressive Conservatives, prefers that the government stay out of the gambling business. He and his Tory colleagues consider that the money to bolster the gaming and horse-racing industry should come from gambling profits, even at the expense of those monies being directed into the general revenues. Hudak would like to see gambling turned over to the private sector — which, in point of fact, the OLG intends to do. In general, the agree that, beyond generating profits, gambling serves alternate goals as well, including facilitating the development of regional economics.

The New Democrats object to gambling on a moral level, though they were the party that introduced casinos to Ontario in the first place. They do, however, admit that it is "short-sighted" to close gambling facilities.

As long as the Liberals remain in power in Ontario, it seems that the government will continue to see casinos and the lottery as an acceptable revenue generator. The province continues to rely on gambling revenues but doesn’t want to maximize those revenues or expand gambling facilities too much, so as not to alienate anti-casino advocates.

BC Liberals were once vehement in their opposition to casinos in the province. In 2001 they declared that “a BC Liberal government will stop the expansion of gambling that has increased gambling addiction and put new strains on families.”Yet today the Liberal Party in BC has done a 180-degree turn. As the ruling party in B.C. they are presiding over a massive expansion of casino building in the province and promoting the BCLC’s PlayNow online gambling site.

As in Ontario, the change of heart is due to the money trail. British Columbia has a massive $1.8 billion deficit and the proceeds from the gambling activities are being used to pay off bad debts. Premier Gordon Campbell of the Liberal Party, who once rallied against gambling when the New Democrats were in office, has now become a proponent of opening new casinos, expanding racetracks, bringing slots machines to casino venues and offering new gaming options through the British Columbia lottery. He envisions increasing net government revenues from gambling pursuits to a possible $1.1 billion by the end of the year.

Patrick Kinsella, the BC liberal Party’s former campaign chair, is a top lobbyist for the Great Canadian Gaming Corporation. The GCGC runs multiple BC casinos and horseracing tracks together with other gambling operations around the country. Many gambling critics point out that Kinsella’s involvement has made him an influencial backroom figure and is a significant factor in the Liberal Party’s support of BC casinos. Kinsella’s horses often run at the Hastings Racecourse. Kinsella makes no effort to hide his ties, describing himself and his business on the BC Lotteries registry as “Casino operations in partnership with BC Lotteries Corporation.

Regardless of the role that Kinsella plays in the BC gambling scene, it’s clear that the BC Liberal Party is hugely supportive of gambling expansion, both online and face-to-face, throughout the province.

Liberal support of gambling can’t be taken for granted in all provinces. In Alberta an online gaming site, operated by the Alberta Gaming and Liquor Commission (AGLC) is expected to be up and running by the end of 2015. The project has moved quickly — from the initial proposal in January 2015 to the site’s planned launch within the next few months, barely 12 months will have passed. Robert Campbell, who, as a representative of the Progressive Conservatives was the finance minister of Alberta until this past May, pushed the project ahead. Liberals in Alberta, under the leadership of David Swann, are more wary and would like to see things move more slowly. Party members express concerns that bringing online gaming into the province at too fast a pace may start the ball careening down a path of no return. In expressing his concerns to the legislature, Swann said that the proposal "certainly hasn't been presented to us in the legislature and presented to the public. It sounds like it is afait accompli, which is unsettling in the least.” Yet Swann didn't outright object to the online gambling site and Alberta Liberals may not be far behind Ontario and BC Liberals in their support of gambling in the province.

The future of gambling expansion in Canada is unclear these days. However, if past performances are any indication, the gaming industry in Canada has a friend in Trudeau’s new Liberal government.